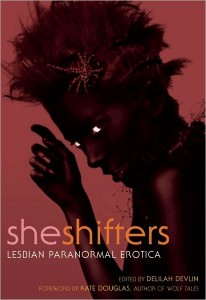 As you may recall from my previous post, my lesbian shapeshifter piece, “Thwarting the Spirits” is now available in the Cleis Press anthology, She Shifters, edited by Delilah Devlin.

An excerpt from that story is now available over at the She Shifters site.  Warning: Not entirely safe for work.

A review of the anthology can now be found over at Erotica Revealed.

As mentioned earlier, I’m really quite fond of this story, and pleased with how it turned out.  When I originally saw the call for submissions, I racked my brain for some kind of shapeshifter dyamic which would keep me interested. No wolves or cats for me! If I was going to go with were-creatures, I was going to go as far off the grid as I could manage.  And so the idea of a were-cobra and a were-mongoose, fighting, entangled by emotion and magic, was born.  From there, I worked backwards, to determine just who my lucky protagonists would be.  There had to be a reason for their animal affinities, a reason why these two people were related to these specific beasts.  Many hours of research later, and I had it.

Meet Hala Laghari: Pakistani-American, Muslim, research librarian, mongoose.  And meet Purnima Gurtu: Indian-American, graphics designer, cobra.  They’d love each other, if they weren’t cursed to fight one another in their animal forms….

I’m also pleased because I was able to throw in some other characters who either have, or will, show up in my other works. Isobel Sparks: were-raven and solver of problems. Raoul, one half of the infamous Coyote Brothers, causer of problems. And Phoebe Masters…mystery woman.  I had fun letting these characters interact, and I can’t wait to revisit them all in future escapades.  Some might even be the sort of story you can take home to meet the family. (Though don’t tell the Coyote Brothers, they pride themselves on a lack of respectability.)

So hey, check out She Shifters and see why the editor said, “Michael’s story struck me due to its fairy tale quality, quiet dignity and beauty.”  (Talk about a nice ego boost!)