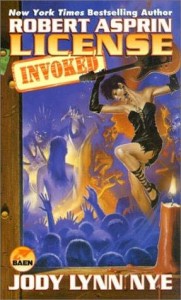 They’re not Mully and Sculder, or whoever those two are. Not by a long shot. In fact, the only thing Liz Mayfield and Boo-Boo Boudreau have in common with the Dynamic Duo of the X-Files is that they’re both government agents, members of small and obscure departments devoted to dealing with the paranormal, the unusual, the inexplicable, and the occult.

Elizabeth Mayfield is from overseas, an agent for the British Government Office of Occult and Paranormal Sightings Investigation. That’s right, OOPSI. Sigh now, because it doesn’t get any less tongue-in-cheek as we go along. Her counterpart is Beauray Boudreau, better known to his friends and colleagues as “Boo-Boo,” an easygoing good old boy from New Orleans who’s a “free-lance” stringer for the FBI’s Department BBB (Bibbity-bobbity-boo, a holdover from those wild and wacky try-anything ’60s). The uptight Brit and the laid-back American are about to go head to head as they’re forced to partner on an assignment which will tax their resources to the limits, and either make or break their departments for the year.

It seems a certain -very- visible rock star, Fionna Kenmare, lead signer for the Irish acid-fold-punk-rock band Green Fire, is having some occult problems, and they’re following her on her new world tour. Poltergeists? The Fae? Psychic assault? Bad karma? Who knows, but she wants it stopped, and now. And so do the unnamed higher-ups who’ve assigned Liz Mayfield to this unorthodox (and not entirely welcome) assignment. And since the FBI wouldn’t want to be left behind, they give her their best (not really) man for the job (only one in the area, to be truthful), Boo-Boo. Dana and Fox, eat your hearts out.

There are complications. Liz and Boo-Boo don’t entirely like or trust one another. Fionna doesn’t want them around. They have to stay as unnoticed and undercover as possible, to avoid publicity. There’re more intrigues and jealousies in the band and its entourage than is healthy. Oh, and there’s a fiendish plot by SATN-TV, which proves that cable is evil, to utilize Fionna for decidedly nefarious purposes. Then there’s the fact that Liz and Fionna are old school buddies, which doesn’t please either one of them.

Things get messier and messier as the investigation into the invisible, unpredictable attacks continues. Things burst into flames, objects levitate, people vanish, and in between, Liz meets Cajun-style cooking. It’s big trouble in the Big Easy, with just two agents there to prevent a tragedy of epic proportions if Fionna’s concert goes awry, as her enemies desire.

Luckily, Liz and Boo-Boo have a few aces up their sleeves, in the form of magical spells and resources that they’ll definitely deny if caught or exposed. Liz is a practicing witch, Boo-Boo a practicing … er … something-or-other.

And when they pull in representatives of two dozen or so different religious and arcane traditions to lend them a hand, it can only get more interesting. Eighty thousand people are on the line if Liz and Boo-Boo can’t pull off a minor miracle with a little help from some friends.

Straight up, this is comic fantasy, something both Robert Aspirin (The Myth series) and Jody Lynn Nye (The Mythology 101 series, the Don’t Forget Your Spacesuit Dear anthology) are quite familiar with, and it’s as good as anything I’ve seen from either of them in a while. It’s a fun and quick read with engaging characters, a familiar-but-enjoyable premise, and plenty of potential for sequels. I’d be surprised if we didn’t see more of Boo-Boo and Liz, as the chemistry between them shines and carries the story along swiftly. This may not be the most complex or sophisticated novel of the year, but once I started it, I couldn’t put it down. It has just the right touches of quirky asides and self-effacing humor without lapsing into sophomoric hijinx or endless puns, as many comic fantasies seem to do. This book’s worth checking out, whether you’re a fan of Jody Lynn Nye, Robert Aspirin, neither or both. Here’s looking forward to more from this team.