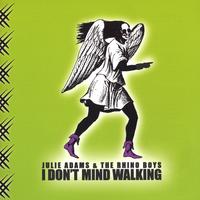 I just don’t get tired of this one. Everytime I listen, I find something else new and interesting buried within its tracks. I Don’t Mind Walking is a masterful blend of well… everything. Julie Adams is a musical chameleon, who, along with her partners in crime, the Rhino Boys, delivers one surprise after another. Every time I try to nail down Julie’s style, it changes in the very next song. If I were going to write up a recipe for this album, I’d have to say that it was one part jazz, two parts country, several parts personal style, a little rock, and a whole lot of talent.

For those not in the know, Julie Adams is known best for her tenure on “Mountain Stage,” a nationally-syndicated radio show produced in West Virginia that specializes in reinterpreting, recreating, and redefining a wide variety of music from all genres. Like her first album, Live, I Don’t Mind Walking is an exhibition album, taking some of Ms. Adams’ best work and putting it together on one CD. And if the show is even a fraction as good as the album, then I urge you to seek out both.

Her voice is to die for. That’s all I have to say about it. It’s downright impressive just how easily she can switch from a country tempo to a jazz beat to a soulful croon, and make it sound completely natural. Julie Adams is the sort of vocalist who can write her own ticket in any style or manner she likes. Whether she’s hitting the high notes or going low to sing that song just for the listener, she’s never out of place and never manages to hit a bad note.

Thankfully, she’s backed up by a group of musicians that do her singing justice. The Rhino Boys, as they’re billed on the title,consist of Steve Hill (guitars), Ammed Solomon (drums), John Kessler (bass), and occasional visitors, such as Doug Payne and David Porter. Together, they quite simply make music. Good music.

Listen to the trumpet in the background of the so-called”folk-funk” track, “Little Bit,” and groove to the energetic rhythms of Solomon on hand drum, and Adams belting out a blues-funk melody. Now close your eyes and imagine this song being performed in a jazz club. The only thing missing will be the cigarette smoke.

Snap your fingers, tap your toes, and rock along with the gang in the opening track, “I’m On Wheels,” a powerful anthem to seeking your fortune rather than letting it pass you by any longer. This song gleefully sets the pace and introduction for the album and is what originally captured my interest.

Slow down just a little, relax, and let “Everthing Falls Through” wash over you with its somber atmosphere and warning against running out of choices before you run out of dreams.

The title track, “I Don’t Mind Walking,” is a beautiful, profound description of just what one person’s willing to do for love. Play this one for someone you love, if you ever run out of words for the moment. Bring candlelight.

I could go on, but the best way to experience this album is to listen to it. Julie Adams mixes pop, jazz, folk, country, and a host of less well-defined traditions to create an ecletic blend that never disappoints. If you like this one, don’t forget she has another album, and appears regularly on “Mountain Stage.”