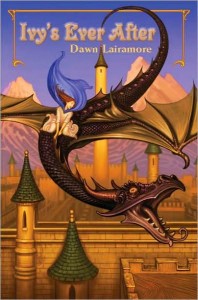 For many years, it’s been the custom for the princesses of Ardendale to be locked up in a tower on their fourteenth birthday, guarded by a dragon. Whoever kills the dragon gets to marry the princess and become the next king. Strange as it seems, this Dragon Treaty has kept peace between humans and dragons for generations. However, when the time comes for untraditionally-minded Princess Ivy to take up residence in the tower, she actually runs away … with her dragon guardian acting as companion on her quest to track down her long-missing fairy godmother. It’s the only way to foil the evil plans of the wicked Prince Romil of Glacia, as well as the only way for Ivy to determine her own fate and prevent her new dragon friend from a horrible death. All they have to do now is survive a trip filled with giant spiders, hungry trolls, haunted swamps, and cranky dragons.

This story of a girl and her dragon is sure to remind some readers of other stories told along the same lines, from Patricia Wrede’s Enchanted Forest Chronicles to Jessica Day George’s Dragon Slippers, but it’s still a rather charming, fast-paced, enjoyable story in its own right. It’s easy to cheer for a princess who takes control of her own destiny, a decidedly nonstandard dragon, and all the other subtly twisted fairy tale trappings in attendance here, and it makes for a fun read.