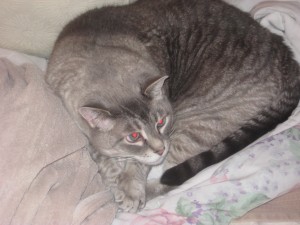 Today, we lost one of our cats. Being, as he was, a most magnificent creature, he deserves his moment of immortality.
Salt, or as we occasionally called him, Seasalt Worrywart, was one of those accidental cats, the sort that comes into your life by pure chance, and hangs around because that’s just the way these things go. He and his sister, Pepper (yes, we went there) came from the mountains of Southwest Virginia. His mother was a little gray cat of indeterminate origin who only tolerated people for their food and opposable thumbs. His father… well, his father was clearly virile, ambitious, and none too picky. We think bobcat, or mountain lion, or something else equally large and offputting. The simple truth is that Salt was a sweet, simple, more-than-likely inbred farm cat from the mountains. We took Salt and his sister in when the parents-in-law had to spend some extended time in Roanoke. They needed to find these kittens a good home, and we said sure, we could help. And we never got around to it. Instead, Salt and Pepper stayed right where they are, and made themselves at home with us.

Salt was not a smart cat. You could look in one ear, and out the other, and see daylight the whole way through. He was not a brave cat. He was frightened of his own shadow, and would run anytime anyone even looked at him funny. He’d bolt if you got within ten feet when he wasn’t expecting you, cry piteously as he fled the room, and was a champion at hiding. Taking him to the vet was a monumental task in its own right. He preferred to be left to his own devices, until it was time to be fed, or until he decided he wanted loves and cuddles. He was born feral, and never quite socialized properly. We’re pretty sure he wasn’t entirely all there as cats go. He was also slightly cross-eyed. He was also huge. At last weigh-in, he ran somewhere around 23 pounds. When he ran, he waddled. No diet or special food could ever change that. He simply was, in his own strange, special way.

Salt was sweet. Catch him at the right time, and he was a soft, purring, drooling, kneading lovebeast, with paws like dinner plates and razor-sharp talons to match, and he rarely misused them. You could use him as a full body pillow, and he was cool with that. He was loving. He’d often curl up with our Maine Coon, Gabriel, and together they’d fill cat beds to overflowing. He had a lovely singing voice, and would exercise it frequently, at night, in the stairwell. He gave impromptu concerts like you wouldn’t believe, amazing and terrifying people who stayed with us. He was a beautiful cat. White and silver and gray and black, with huge blue eyes, and a lovely ringed tail. 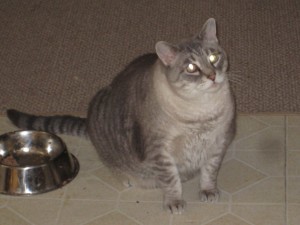 Tonight, we found him outside on our screened porch. It looks like he just lay down for a nap, and that was it. His time here was done, and he was ready to move on. No muss, no fuss, no warning. He’d been fine right up until the last time we saw him. He lived as he lived, and he passed on with as little bother as possible. He’d have HATED drawing it out any longer than necessary. No medicine, no vet trips, no surgery, no drastic measures for him. Somehow, I’m not surprised that he found a quiet, dignified way to exit, stage left.

Salt was a magnificent cat, one of a kind, and I already miss him. I know he’ll live on in our memories, and his fictional counterpart has already started making an appearance in my stories. Take care, my Big Kitty of Doom. I hope your next life is even better.