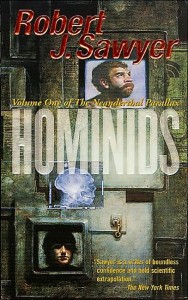 Acclaimed author Robert Sawyer begins a daring new trilogy with this tale of overlapping alternate histories. When a quantum-computing experiment in one world meets a neutrino observation post in another, things go horribly wrong. Scientist Ponter Boddit is thrust into our world, and stranded. The problem? In his world, Neanderthal man survived to form a near-idyllic society, quite different from ours. Now he has to come to terms with a new world, while his partner back home is accused of Ponter’s murder. Geneticist Mary Vaughn is just one of several experts who will first verify the impossibility of Ponter’s existence, and help him to adjust. But only if they can crack the barrier between worlds open again, will everything be fine. One thing is certain: neither world will ever be the same again, once a mutual existence is revealed. Sawyer once again delivers cutting-edge science and believable characterization in one of his best books to date.