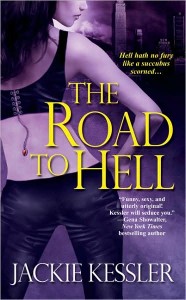 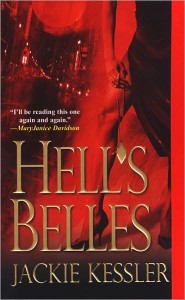 For a very long time, Jezebel the succubus was very good at what she did: tempt and seduce mortals, and ultimately suck the souls of the damned down to Hell for their eternal punishment. And then something happened, an upheaval in the workplace, so to speak, and she did what just about no other demon had ever done before. She ran. Abandoning Hell and her duties, she fled to Earth, where she adopted a mortal identity with the somewhat unwitting help of a witch acquaintance. Armed with stolen credit cards and a meager wardrobe, disguised as a human and barred from the use of her infernal powers, Jezebel gravitated towards a profession right up her alley. She became a stripper.

Unfortunately, just because one escapes from Hell doesn’t mean they’re entirely free. First her friends — the Fury known as Megeara and the incubus Duanuan — find her. And then her enemies, including the infamous Lillith, Queen of Hell show up on her doorstep, and before she knows it, the succubus-turned-stripper now known as Jesse is once again in some mighty deep trouble. Worse still, her newfound lover, Paul Hamilton, is caught in the crossfire. As Jesse tries to extricate herself from the mess, to remove the price on her head and escape Hell’s clutches, her backstory unfolds, showing just what happened to shake up Hell, and why she chose to leave rather than continue doing her duty. Ultimately, she ends up changed. For better or for worse, no one can say, except that Jezebel the succubus is no more . . . or is she?

All of the above is related in Hell’s Belles. In The Road To Hell, Jesse’s life gets even more complicated. She’s still seeing Paul Hamilton, the sexy vice cop to whom she’s given her heart and soul (inasmuch as she has a soul, anyway), and she’s still stripping for a living, now working at a classy joint called Spice. Unfortunately, just because she’s ready to leave Hell behind once and for all doesn’t mean that her former coworkers and superiors are willing to respect that wish. Rapidly, the problems once again mount. Megeara’s even more fearsome sister Alecto is trying to coax Jesse back to Hell, claiming that Meg is in horrible trouble. Duanuan the irresistible incubus is still trying to seduce Jesse away from Paul, especially now that she’s vulnerable to his copious charms. And Lillith, one of the most fearsome beings to occupy Hell, is out for revenge once again. Complicating matters even more is Angel, a, well, angel-turned-novice succubus who’s looking for pointers, and Paul himself, whose disapproval of Jesse’s stripping may put an end to their relationship.

Mind you, that’s just the tip of the iceberg. Eventually, things come together in such a fashion that Jesse has no choice but to return to Hell, to fight for her right to live, the soul of her boyfriend, and the freedom of her best friend, a quest which will bring her into conflict with the new ruler of Hell and one of the most powerful beings in the universe. Let’s just say that if she survives this, she’ll appreciate the mortal life all the more for it.

Taken together, Hell’s Belles and The Road to Hell do an excellent job of chronicling the growth of Jezebel as she goes through the trials and tribulations of falling in love, becoming mortal, returning to her roots, living, dying, gaining a soul, and generally developing a much larger range of emotions and experience than most of her kind. Her propensity for free will remains a somewhat unexplained oddity, putting her directly in contrast with just about every other denizen of Hell, suggesting that there’s still more to her than has been explored. It’ll be interesting to see where this goes as the series progresses.

Now to pause, and look at an essential aspect of the series thus far: the sex. Quite simply, there are points in both books when things get downright pornographic, and words like sensual, sexy, sizzling, and steamy barely do it justice. Kessler has a real flair for turning up the heat, taking full advantage of her characters’ natures and histories to keep things at a fever pitch. It’s hard to open either book and not find a scene where Jezebel isn’t taking her clothes off, seducing someone, or being seduced in return, and yet the way it’s presented, it’s all part of the story. After all, when you’re dealing with demons who embody lust, where the main character is a succubus-turned-stripper, you can either find a way to work around it (such as in Richelle Mead’s Succubus Blues) or embrace it whole-heartedly, like Kessler does. Rest assured that while the “adult” scenes are fairly frequent and in-depth, they serve a larger purpose and keep the story moving.

In fact, I found the plots of both books to be rather fast-paced and compelling, with events moving at enough of a pace that it was hard to stop reading. In Hell’s Belles, I wanted to find out just what happened in Hell to make a seasoned succubus like Jezebel run for the mortal world, and in The Road To Hell, I wanted to see how she’d extricate herself from the current mess of problems she’s attracted. In both cases, Kessler kept things going quite nicely, the end result being that I polished off each book rather swiftly.

Her descriptions of Hell are memorable and suitably terrifying, and I really liked Kessler’s setup of the relationship between Heaven and Hell, punishment and redemption, and the various beings that populate both regions. You can never forget that no matter how friendly or approachable or seductive some characters are, they’re still demons, and no matter how relatable, many of them are utterly inhuman, operating on a different level of power and motivation. Even Kessler’s angels, and we see a few representatives of that faction, stand out as tangibly different. The presence of certain beings not normally associated with the Heaven/Hell construct, such as Pan, Lillith, and the Furies, suggests that there’s a lot more going on than we’ve seen in the two books so far, and I’m hoping we’ll get more of the larger picture over time.

So in case it’s not obvious, I really enjoyed Hell’s Belles and The Road To Hell. The main character is flawed but likeable, the setup is intriguing, the physical scenes are hot, and the plot quick-paced. Having read both books back to back, I can hardly wait for the next in the series, which promises to follow the incubus Duanuan for a change (and given his nature and history thus far, that proves to be quite . . . interesting.) If you’re looking for paranormal romance with a healthy dose of erotic content and a female protagonist who doesn’t mind upsetting the status quo wherever she goes, I definitely recommend these books