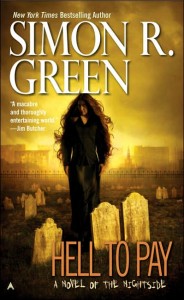 Lilith may be gone for good, but the Nightside, that sordid dark heart of London remains, a magical place where anything’s possible, everything’s for sale, and everyone has a hidden agenda. And as long as the Nightside endures, there’s work to be had for John Taylor, the most dangerous P. I. in town. Because let’s face it, saving the world from ancient evils doesn’t pay the rent, and in the Nightside, there’s always someone who needs something.

This time, it’s Jeremiah Griffin, the obscenely wealthy immortal who’s made no secret of his intentions to fill the power vacuum left by Lilith’s machinations. But before he can take over the Nightside, he needs John Taylor to locate his missing granddaughter, his newly-designated heir, who’s vanished without a trace. And that’s where it starts to get ugly. Because now John’s going to have to turn over some very nasty stones and deal with all the dark, wriggling secrets and cold truths that come squirming into the light. He’ll track down and question Griffin’s wife, children and spouses, and grandson, and his search will take him into some of the most exclusive — and most disturbing — establishments in the Nightside. Immortality, after all, can inspire all manner of interesting vices to stave off the boredom. And then Taylor will learn just how Jeremiah Griffin became immortal, and what all that entails. Will John Taylor escape with his soul intact? Hey, no one ever said life in the Nightside was dull, safe, predictable, or sane. Especially once the Salvation Army Sisterhood, the original nuns with guns, get involved.

After the epic events of the past few books, it’s almost relaxing to get back to something as down-to-Earth as a missing person case, albeit one with a Nightside twist. As always, Green shines in his over-the-top, non-holds-barred action and descriptions of the Nightside’s nastiest, strangest corners. The beauty of this setting is that just about anything can, and does, make an appearance, including some characters from other books, such as Bruin Bear and Jimmy Thunder. Not only do Nightside regulars Larry Oblivion, Suzie Shooter, and Dead Boy show up, but a whole host of new characters get their time in the spotlight.

I’ll be honest: after you’ve read enough of Simon Green’s books, you begin to see certain recurring themes, and Hell To Pay reminds me strongly of some of the Hawk and Fisher novels. The wealthy are all decadent and twisted, though not without vaguely redeeming features. The authorities are corrupt, or at least fairly nasty in their own way. Weird Stuff ™ wanders in and out of the story for no better reason than Green felt like it. There’s always someone who’s the most whatever (strongest/fastest/nastiest) or the best whatever (swordsman/businessman/fighter), or just plain scariest. Mind you, this isn’t a bad thing. These books occupy a very distinct niche in their own right, and no one can write quite like Simon Green when it comes to stylized or extreme dark/urban fantasy storytelling. He doesn’t take it seriously, and neither should you, because it’s all in good fun. I absolutely love this series, and Hell To Pay is the perfect place to jump in if you can’t be bothered to read the first six in the series (but really, why wouldn’t you?) Hell To Pay is urban fantasy with a neon edge, and its shameless abandon is a welcome change from the books that wallow in angst and indecision. (And in a subgenre rapidly overflowing with paranormal romances, it’s refreshingly light on matters of the heart.)

So I’ll happily recommend Hell To Pay as a worthy addition to the Nightside series. It may not break much new ground, but it’s thoroughly enjoyable in its own right, and that’s enough for me.