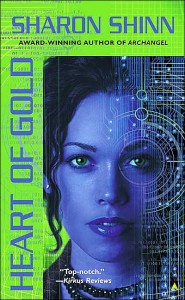 Sharon Shinn’s latest novel delves deep into the nature of love and racism, setting the age-old concepts on a world where three separate races must manage to coexist without letting their underlying distrust of each other destroy them all. For the caste-driven matriarchal indigos, it’s a question of keeping everyone else in their place, the males of their own race most assuredly second-class citizens. For the hot-tempered patriarchal guldenfolk, it’s the women whose place is in the home. And balancing them out, the intelligent and relatively peaceful albinos mind their own business. But in one particular city, all three of them mingle freely, though always one step away from violence and hatred.

Nolan is an indigo, a scientist whose fiancée and family are sure he’ll get over his silly little notion of having his own job and independence, and will settle down soon enough. Uncomfortable with the ways of his race, increasingly more comfortable with the interracial spirit of unity that he finds at the Biolab in which he works, he finds himself heading straight into a moral and ethical dilemma that could cost him everything.

Kit, a higher-caste indigo woman, has her own problems. Her lover, one of the guldenfolk, is under arrest for his terrorist activities. Her grandmother terrorizes her, and she too is increasingly dissatisfied with the ways of her race. She will soon be forced to choose between love, duty, and what is right. The wrong choice could doom an entire race.

Their paths collide violently one day when Nolan uncovers a deadly secret. His research, and that of the others in the Biolab, has been co-opted by a coworker, and twisted to create a virus that could kill millions. Unless he turns against his friends, and enlists the unwilling aid of Kit to invade the very heart of the guldenfolk territory, the fragile peace will be destroyed. But the guldenfolk have no reason to like him, and even less to trust him. Only with Kit’s aid can he prevail. But will she side with the guldenfolk, one of whom she loves?

Heart of Gold is a story that never forgets it’s about people first and technology second. Even the setting takes a backseat, as I can’t even remember the main city in which the action takes place being called anything other than ‘the city.’ No, the narrative focuses squarely upon Nolan and Kit, and their friends, and the growing tensions between indigo and guldenfolk which edge ever closer towards full-blown hostility and genocide. The blue-skinned indigos are portrayed quite believably as a matriarchal society, where the women have all the power and prestige, and the men have little responsibility. The gold-skinned guldenfolk are their exact opposites, portraying a fierce, proud, highly independent society where adult males have all the power, and those under the age of twelve might not even exist for all they matter. Is it any wonder that these two cultures clash so often and so messily? Their skin colors only make it all the easier to draw lines between them.

All in all, I greatly enjoyed Heart of Gold, primarily for the way it told the story, and conveyed a message without dropping into heavy-handed lecturing. The characters had genuine choices to make, and authentic reactions. What’s more, the setting could likely lend itself to future revisiting.