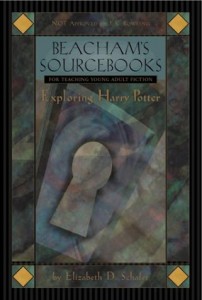 Coming on the heels of the immense, almost unprecedented popularity of the Harry Potter books comes this gem. The full title is Beacham’s Sourcebooks For Teaching Young Adult Fiction: Exploring Harry Potter, and it’s the first in a series that will hopefully live long and prosper well enough to tackle more classic literature. The second volume in the series is planned to cover C.S. Lewis’ Narnia books. After that, who knows? Susan Cooper? Madeleine L’Engle? We can only wait and see, but if the next books are anywhere near as thorough or intelligent as this one, we’re in for a treat.

It should be noted, right away, that this is not approved by J.K. Rowling, but is drawn from intensive study of the first three books, interviews, press releases, advance material regarding the fourth, and general information. Thus, while not official or authorized, it’s still one of the best studies of the series out there at the moment, and could easily be used as a textbook in class or at home.

But what’s it all about? It’s about Harry Potter, naturally. However, it approaches things from a scholarly viewpoint. The book contains nearly 500 pages in a hardback format, divided into chapters grouped by subjects, starting with “Beginnings,” which goes into a brief biography of J.K. Rowling, and how the whole Pottermania phenomenon got started and where it’s going.

The next section is the longest and most comprehensive. Entitled “Reading Harry,” it takes a detailed, thoughtful, intelligent, analytical approach regarding characters and themes, settings, school life, food, sports, geography, mythology, archetypes and Biblical references, history, science, witchcraft and magic, literary qualities, moral and social codes, and finally illustrations and foreign editions. Where appropriate, the sections look at the meanings and interpretations of names, classical inspirations for Rowling’s choices, literary and historical antecedents, and much, much more. Quite simply, if it’s in the books and it can be analyzed or interpreted, it’s in this section. Everything from gender roles to the uses of color in description to the relationship between names to good versus evil to numbers to life in an English school. It’s quite exhaustive, to be frank.

After that comes “Teaching Harry,” which breaks the series down into the first three books, and offers overviews, chapter developments, projects and activities, discussions, and ways to improve writing and critical skills. This is basically the workbook section, geared towards using Harry as a scholastic or heuristic source. A timeline combining the real life and literary events of Harry Potter follows.

Next is “While You’re Waiting For The Next Harry Potter Novel,” which contains ways to keep yourself amused between books. There’s an extensive list of other books people might enjoy, drawn from children’s, classical, and fantasy literature, far too extensive a list to try and reproduce here. Conjectures on the future of the series and its title character come next, along with more activities and possibilities for discussion topics.

Section 5, “Bibliography and Appendices,” is exactly what it says it is, and is invaluable for providing straightforward lists of characters, creatures, objects and more, as well as an appendix devoted to mythological beings cited earlier in the book.

Finally, the last section is devoted to online resources, and actually points the reader to Beacham’s Web site at www.beachampublishing.com, which is a far smarter thing than trying to list such material in print, given how quickly the Internet can change from day to day. An index at the very end of the book provides help in finding specific names or concepts.

What can I say about Exploring Harry Potter except that if you like the series at all, this is a perfect companion piece. It’s intelligent, immensely detailed, educational, and high quality. I’m impressed by what I see, and I think there’s a future for the Beacham series if they can keep it up. While it draws upon the popularity of Harry Potter, it’s good enough to stand on its own as a piece of academic excellence. And if it can help turn the phenomenon of Harry Potter into something people can also learn from, so be it. This book comes very highly recommended, and can be found in most local bookstores, or online via the usual sources.

The author, Dr. Elizabeth Schafer, has been actively writing about history, children’s literature, and science for several years now, and was the recipient of the Shirley Henn Memorial Award for Critical Scholarship in Children’s Literature from Hollins University in 1998.