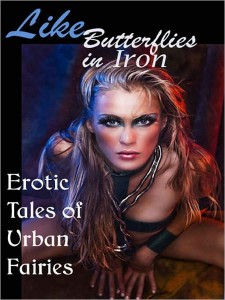 She’d been taken by the Unseelie Court, the autumn Fae who bore no love for humanity, only contempt, and they’d misused her horribly.

I reached out in sympathy, but she flinched away, cold tea slopping over the sides of the mug. No longer finding comfort in holding it, she put the mug down on the end table separating us. “I’m sorry,” I said automatically. Sorry for replacing her. Sorry for reaching out to her. Sorry for existing.

“Sorry? SORRY?” She leapt from her chair, eyes blazing, once again full of that confused mix of bitterness and longing. “I was seven when they took me! I was there for twenty-one years! They took a little girl whose parents upset her, and turned her into a killing machine for their own amusement!” Furiously, she yanked off her sweatshirt in one fluid movement, throwing it aside to reveal a dingy white tank top underneath. Her bare arms were pale and muscular … and covered with scars of all sorts. She indicated one that ran down the length of her underarm, from wrist to elbow. “That’s from when I realized there was no escape … before they placed a geas on me to keep from harming myself in such a manner.” A constellation of tiny round ones: “Pixie darts. The bastards use poison. One won’t kill you, but a hundred would.” A bite on her left shoulder: “Dire wolf. I had to strangle it with my bare hands, even as it was trying to eat me.”

She tugged her top upwards, exposing a flat, athletic stomach that I couldn’t have obtained if my life depended on it. It, too, was marred. An ugly slash of a scar ran straight across, just above the navel. “Troll axe. A little deeper and I’d have been trying to stuff my own guts back into place.” A series of thin slashes on her side: “Redcap claws. They wanted to dip their caps in my blood to increase their own strength.” She struggled free of her capris, extracting one leg, then the other. The pants joined the sweatshirt. All she wore underneath was a black thong – another item looted from my clean laundry. Her legs were long, toned, and lovely, but bore more souvenirs of a hard existence. In rapid succession she pointed out more injuries. “Almost hamstrung by a boggart. Bitten by goblins. Broken by a giant.”

I couldn’t look away. Her emotions were running wild and free, battering at my defenses. I felt the memory of each wound as she pointed it out, echoing down through the years. The stabs of pain, the throbs of agony, the rush of adrenaline. I took quick, shallow breaths, trying to stay focused. She turned to show me the ornate symbol on her lower back, the complex glyph whose purpose I knew before she even said it: “Branded by my owner.” She swiveled to regard me, and I saw myself through her eyes. I was soft, untempered, weak, delicate. I was everything she was not, and my hands were free of blood. “And you’re sorry?” she asked. “I fought my way out of Faerie after spending three-fourths of my life bleeding and defying death for a race that cannot die. I did things I’m not proud of to be here. I came back to see what had become of my old life, and here you are.” The look she gave me pinned me to the couch. “The wards let me right on in. After all, I’m you. Holly Ann MacCormack. That is, I was until Lady Rowan gave me the name Ash. It amused her to steal my name, also.” She shook her head violently, starting to pace around the room, a wild animal restless in a confined space. She was gorgeous, exotic and dangerous; I couldn’t help but admire the view. I raged inwardly at my traitorous libido, which took in the athletic shape of her ass, the strength of her limbs, the force of her personality, and yearned for something more. She wore danger like a cloak, and it spoke to the part of me which had never known such a threat.

Interested?  Want more?  You know where to get it….