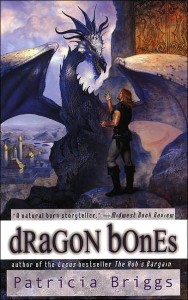 Sometimes, it pays to lay low and let people underestimate you. Certainly that’s the game plan for Ward of Hurog, whose father is a psychotic, abusive bastard on his best days, and a tyrant on his worst. Ward’s already lost several relatives to the vicious power plays and conniving of his family, and wants nothing to do with it. So he plays dumb. Real dumb. And he’s a good enough actor to pull it off, too. No one suspects that he’s really quite smart, not even his beloved sister or rambunctious cousins.

That’s all about to change. A freak accident kills Ward’s father, and leaves him in charge of Hurog Keep, making him the new Hurogmeten. If Ward can’t convince everyone that he’s up for the job, and quickly, his conniving uncle will seize the power from under him.

Ultimately, Ward’s only hope lies away from his beloved home. If he can just become a war hero, he’ll have no trouble assuming control and keeping it. With the state of the world as it is, there’s bound to be action somewhere. So he sets out, accompanied by an unlikely group of people: his mute sister Ciarra, his estranged brother Tosten, the dwarven warrior Axiel, the fighter Penrod, the escaped slave and sorceress Bastilla, and the enigmatic boy wizard Oreg, whose very existence is tied up with Hurog Keep in inexplicable, ancient ways.

As the motley assortment travels cross country, Ward’s twin cousins, Erdrick and Bertram, get caught up in a murderous, unpredictable game of intrigue at court, which kills one and threatens to kill the other. Their story will soon intersect with that of Ward and his companions, and the results will be explosive. Someone will betray Ward and friends, and it’ll be someone they never expect. A mysterious force will plunder the countryside, seeking long-lost artifacts of magical power. And a pile of dragon bones will be found lying beneath Hurog Keep, and in them lies the greatest power of all.

Ward will make the greatest sacrifice imaginable to save the country from an even greater threat. He’ll destroy everything his family stands for, and kill someone close to him, all for a greater good. The only question is, will it be in time?

I enjoyed Dragon Bones. Though at time it was hard keeping the political intrigues and schemes straight, I found Ward to be a likable, straightforward character who carries the narrative quite nicely when he’s on stage. All in all, this is an enjoyable, well-written book, with enough plot twists and turns to keep the reader’s attention. While there are plenty of questions left over, the projected sequel to Dragon Bones will undoubtedly answer them. This book is sure to appeal to lovers of fantasy, and may serve well to cleanse the palate between larger or more complex works.