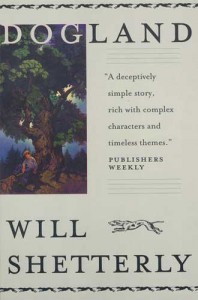 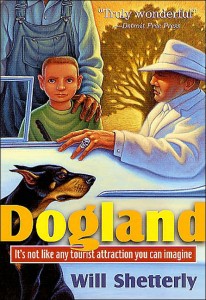 It’s 1959, and young Christopher Nix, just turned four, has moved to Florida with his family. His father, Luke, has plans to open Dogland, a tourist attraction and zoo starring over a hundred different breeds of dogs, everything from Irish wolfhounds to poodles, from Dobermans to bulldogs, from basenjis to beagles. His mother, Susan, will operate the restaurant and gift shop. His little sister, ‘Little Bit’ and his little brother, ‘Digger’ will help out as best they can. It’s a new start for the Nix family, a new set of surroundings, a new community, and a whold new world.

It’s 1959, and racial tension is at a high, Jim Crow laws still in effect down in the South in places, and segregation the sort of issue to turn a community against itself. The Klan meets at night, the old white guard finding brotherhood in their hatred and bigotry. The world is changing rapidly, and the Nix family is caught in the middle. For Luke Nix is a just and fair man, who regards blacks as equals, who hires them at the same wages he would whites, and preaches tolerance to his impressionable, intelligent children. He hires on Ethorne Hawkins as the cook, and the rest of Ethorne’s family in other capacities: handymen, tour guides, waitress, so that black and white work togethe in an area where that sort of thing is still an issue.
Little do they know that this sort of tolerance will have a deadly cost somewhere down the road.

It’s 1959, and Christopher Nix is four, going on five, and the story of Dogland is told through his perceptions, the odd ways of adults filtered through a child’s understanding. His sense of wonder permeates the story and sets the tone. It’s a time of growth and discovery in a period of instability and change. He’ll learn a lot about the world as he grows up. About religion and politics, atheism and segregation, people and society.

Dogland opens, and Christopher suspects, but never knows for certain, that not everyone he knows is entirely normal. Certainly, the tourists who pass through have secrets and stories to tell. In hindsight, and through our guise as readers, we can perhaps place more meaning to the identities of the colorful cast that Christopher can. Who exactly are Joe and Mary, the wandering couple who travel by horse-drawn wagon? What role does Nick Lumiere, lawyer and manipulator play in all this? What sorrows do Artie Drake, real estate agent, and his daughter Gwenny hide? What power does the ancient Heart Tree hold deep in its roots? And is there more to Maggie DeLyon and her Fountain of Youth motel than meets the eye? Who exactly is Jimmy Tepes, teenager-at-large? Like Neil Gaiman’s American Gods, the people and beings that walk among us may not be ordinary, but they’re not entirely legends either. Shetterly cleverly filters these encounters through Christopher’s experiences, so that even after finishing the book, we’re left to make our own conclusions. Are they really Joseph and Mary, Lucifer, King Arthur, a quartet of Asgardian dieties, Yggsdrasil the World Tree, and the Holy Grail, or are they merely allegorical representations?

The supernatural runs through this book on such a subtle, well-veiled, merely-hinted level that even at its most fantastic, it’s but a shadow cast by the true magic: that of childhood’s wonder. As the years progress, Christopher turns five, six, seven, goes into kindergarten, first grade, second grade. Against the backdrop of the Vietnam War, the Cuban Missile Crisis, the advent of color television, the introduction of Marvel Comics, and the effort to promote segregation, Christopher struggles to find his own place in the universe, his own viewpoint on God, and the reason things are as they are.

It all comes to a boil when Luke Nix makes one too many enemies in his quest for justice and equality. It all comes down to an explosive confrontation with the Klan on a dark and portentious night, when the dogs will run free, fire will split the night, and one very good man will make a deal with the Devil to spare an innocent child. In the end, it really is about the choices we make, and the freedom to make those choices, and the knowledge needed to make those choices intelligently.

This is a brilliantly-told story, written with a sharp eye and an authentic voice, and we’re told just as much as Christopher himself knows, and no more. From that, we must decide for ourselves what something truly means. Often-overlooked in favor of his wife, Emma Bull, Will Shetterly is a master storyteller in his own right, whose books, while rare, are always a thoroughly enjoyable treat. Don’t mistake Dogland’s slow buildup and subtle tones for a lack of fantasy and magic, but instead look for magic in even the most commonplace of occurences.

I must confess, though, that while I originally bought this book when it came out over four years ago, it’s taken me until now to get around to reading it. I kept waiting for the right moment and mood, and they just never seemed to come together. But was this book worth the wait? Yes. It was a welcome pleasure to pull it off the shelf at long last, sit down, and lose myself in the coming-of-age story of a boy surrounded by subtle, quiet magics. This one is worth looking for.