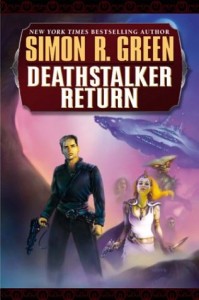 In the latest installment of Simon Green’s universe-spanning space opera, things just keep getting worse for the main characters, and the universe as a whole. Former Paragon and King’s Champion Lewis Deathstalker is on the run, disgraced and condemned by the people he used to protect. His companions include his lover, the famous Jesamine Flowers, the alien reptiloid known only as Saturday, the psychic con man Brett Random, and the sociopathic gladiator Rose Constantine. Their mission is an impossible one: find and bring back the legendary Owen Deathstalker, former hero of the Empire of Man, missing in action and presumed dead for two hundred years. They don’t have much time, as the unimaginably powerful Terror has appeared at last as prophesied, and is destroying entire planets as it steadily approaches the very center of the Empire.
To make matters worse, Finn Durendal, the greatest Paragon ever has gone bad, tearing down civilization with a bloody, brutal, unforgiving agenda of hatred and nihilism. He’s influenced a King, made unholy allies and turned them against one another, engineered genocides and rebellions, and committed atrocities, all to bring the Golden Age to its knees. Intrigue, violence and wildly imaginative plotting all combine in Green’s trademark over-the-top style. No one’s merely ordinary in Green’s books; rather, they embrace their extremes whole-heartedly, giving the characters and the plots a wide-screen feel, like Star Wars on psychotrophics and steroids. Green’s an acquired taste; either you like his style, or you don’t, and there’s very little middle ground. His stuff uniformly turns the dial to ‘11′, so to speak, with visceral fight scenes and complex plotting that doubles back on itself, laying false trails so nothing is predictable, and twists and surprises abound. It’s hard to match the scope (and occasional depravity) of his imagination, which makes each new book all the more welcome. Deathstalker Return is best read after Deathstalker Legacy, and preferrably after the five or so other books that made up the original Deathstalker series. Fans won’t want to miss this book, but newcomers are advised not to start with this one.