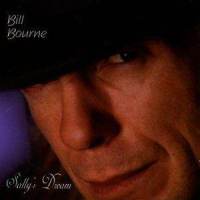 Bill Bourne has been recording music for roughly fifteen years, sometimes collaborating with such artists as the Tannahill Weavers and Hookahman. He has recorded several duet albums with both Shannon Johnson and Alan Macleod as well as a previous solo album Farmer, Philanthropist, and Musician.

Sally’s Dream, the his latest solo offering, is an interesting album, to say the least. My feelings on it were strangely mixed, and thus, I was forced to divide my review into two segments, each focusing on a different aspect of Bourne’s efforts.

My introduction to this album came with the brief description of Bourne as “gravelly-voiced.” This unusual label was enough to catch my interest and to encourage me to give this one a shot. Unfortunately, I have to say that “gravelly-voiced” is not exactly a compliment. Rather, it’s a polite way to say that someone sounds like he’s chewing on gravel. Harsh? Perhaps. But Bill Bourne’s strength doesn’t lie in his singing or in his voice. The first few times I listened to this CD, I found myself flinching at odd times, when he’d hit just the wrong note or launch into vocals without warning. Enthusiasm and technical skill couldn’t quite make up for the almost abrasive qualities of his vocal efforts. Keep in mind, however, that this is just my opinion, and those with better ears than mine may detect hidden qualities. But on the surface, if there was a way to tune out Bourne’s singing and to keep the instrumental portion of the album, I would have.

This isn’t to say it’s always bad — or completely unbearable. I just had trouble listening to him for extended periods. Admittedly, in some songs, he tones it down to a point where you can detect that technical skill. He knows what he’s doing, but he has some way to go before he perfects it.

This leads us to Bourne’s real strength: his instrumental abilities. The liner notes credit Bourne with guitar, harmonica, fiddle, and stomp, and he manages to do all of them credit. I thoroughly enjoyed the instrumentals on his songs, and some of the guitar portions were a pure joy to experience. This is where he shines, and I could have listened to Bourne playing the guitar quite easily. It’s lively, enthusiastic, and talented.

Bourne’s songs are an interesting mix of country, bluegrass, traditional, and “other.” Everytime I thought I had him pinned down to one genre, he’d switch sideways to another, as if to keep the audience on its toes. He’s credited with writing all of the songs save three, several traditional arrangements (“Worried Man Blues” and “Old Hag/Go From My Window”) and one by Mississippi John Hurt (“Louis Collins”).

Of the songs Bourne himself has written and arranged, they range from the modern ballad (“The 20th Century Requiem”) to the humorous (“The Wild Watusi”), from the wistfully romantic (“Seven Angels”) to the quietly beautiful (“Summer At The Circus”). Unfortunately, I honestly can’t say that any truly stood out for me. While good in their own ways, and technically competent, none truly disappointed or satisfied. On the whole, they averaged out at “good” without quite tickling my fancy.

In short, I’d have to say that Sally’s Dream is a fine album. If you’re a fan of Bill Bourne, this is one to pick up for your collection. If you like guitar, harmonica, and country/bluegrass/ traditional, this one might be worth a look. However, this probably won’t be the album to convert a non-believer. I will add that Bourne grew on me somewhat after repeated listenings, but never really overcame my initial reactions.