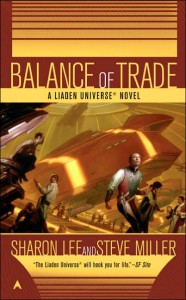 The latest offering from Lee and Miller, though set quite firmly in the Liaden setting, is actually a standalone, the first Liaden novel to date not to feature the influential and far-roving members of Clan Korval. Instead, we’re introduced to Terran would-be trader Jethri Gobelyn, whose family owns a number of trading ships, including the Gobelyn’s Market. His relationship with his family isn’t as secure as it could be; ever since the death of his father, his mother and Captain of the Gobelyn’s Market has become increasingly distant. When Jethri discovers he’s been apprenticed to another ship, he resists the initial idea of leaving the only home he’s ever known. However, an investment gone sour opens up new doors of opportunity, and before he fully understands the consequences, he’s joined the crew of the Liaden ship Elthoria under the supervision of Master Trader Norn van’Deelin, who sees in Jethri a way to bridge the differences between Liadens and Terrans. Now Jethri is continually tested, circumstances dictating he learn a whole host of new customs as he interacts with a people who place an inordinate amount of importance upon honor, reputations, dignity, and propriety. Where one wrong move, or even an improper bow can affect the directions of entire clans, he can’t afford a single misstep. But if he watches his step, he could make a fortune. If only he can overcome the prejudice many Liadens feel towards Terrans, and unravel the mystery left in the wake of his father’s death years ago….
I love the Liaden books. While Balance of Trade isn’t my favorite (that honor still goes to Scout’s Progress), there’s no denying that Jethri Gobelyn is a most likeable character, the sort you can’t help but want to succeed. It could almost be argued that he’s too perfect, given his natural ability to interact on a socially acceptable level with even the most narrow-minded of Liadens, but luckily, his flaws come out when he’s forced to embrace radical change in his life. I also love the Liadens themselves; their concept of melant’i, a code of honor and conduct which dictates their standing in social, professional, and emotional interactions, remains one of my favorite aspects of the Liaden Universe.
Frankly, the only thing I find missing in Balance of Trade is the underlying (or more overt) romance which has characterized the other Liaden stories, something I consider to be one of Lee and Miller’s strengths. I hope we’ll get to see more of Jethri Gobelyn, as his story is far from over. Balance of Trade is a low-key space opera that relies heavily on characterization, multilayered plotting, and social conflicts, rather than on violence and blasters. It’s actually a perfect introduction to the Liaden Universe, and I recommend it to longtime fans and newcomers alike.