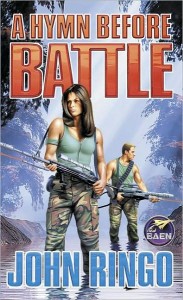 There has been no shortage of books dealing with “First Contact” between humanity and extra-terrestrial races, and the results thereof. In his first novel, newcomer John Ringo skips all of the anticipation and wondering, and gets right down to business, as in the year 2001, we learn that we’re not alone. In fact, there are a fair number of alien races out there, and they need our help.

The battles lines are drawn right up front. The “good guys” are the Galactic Federation, and they offer to share information, technology, and the stars with us for a small price: help fight their interstellar war against the implacable and unending hordes of the Poseen, a race of near-moronic drones led by fierce, intelligent God-Kings. We’re free to refuse the offer and mind our own business, but the war will come to us anyway. Earth is in the Poseen’s path. We fight now, or we die later. And so Earth goes to war. Using alien technology, we design and build mighty suits of combat armor, all the while racing against the clock. We call up our veterans, arm the military, and prepare for all-out war. Millions are drafted or recalled into service, including Lt. Michael O’Neal, Sergeant Major Jacob Mosovich, and Master Gunnery Sergeant Earnest Pappas. While millions will be involved, it’s these three who provide the pivotal and most telling viewpoints, as they experience the war on three different fronts.

For Pappas, it’s the near-impossible job of whipped untried rookies and new soldiers into fighting condition, hampered by short supplies, insufficient information, and mutiny in the ranks. Unyielding, uncompromising, and as tough as any the Marines have ever turned out, he’ll be the only hope for survival some of these soldiers have. For Mosovich, it’s a return to a dirty kind of war, a do or die mission of reconnaissance on a far-distant planet, where the only rules are to survive, don’t get caught, and learn as much as possible about the enemy while there’s still time. O’Neal has the hardest job of all: help design the all-important armored battle suits that could turn the tide against the Poseen, and accompany the first contingent of Armored Combat Suit troops into space. They’re undertrained, undermanned, and woefully unprepared for the chaos and carnage.

With mutiny, insurrection and rioting at home, and mass slaughter abroad, it looks like Earth’s chances may be limited. They’re fighting a two-sided war, hampered more than helped by the “cooperation” of their so-called allies, races of bureaucrats and cowards. Technology is only as good as the user, and only as reliable as the supplier. Inexperience on the one hand and short supply on the other mean that the Earth forces will have to fall back on their best weapons: improvisation and ingenuity. This is all-out war, and a great many people won’t be coming home. Ultimately, even if we do survive and succeed on the initial battlefields, it’s just the beginning of a long and messy campaign. What will happen when the Poseen reach Earth?

As could be expected, A Hymn Before Battle is just the first book in the series. The sequel, Gust Front, is already out in stores. While this book does come to a definite conclusion, there’s more than enough room for much more story along each of the various threads and plots that make up the whole. The writing is intelligent and crisp, the battle scenes appropriately visceral and even over-the-top, as befits a war told on such a scale, and the characters memorable.

Where the book falls down, unfortunately, is in keeping the non-military reader properly interested and informed. Ringo demonstrates his own military knowledge, tossing around the jargon with very little restraint, for that authentic feel. While the characters are wonderful to follow, it’s occasionally difficult to keep up with the abbreviations and acronyms, and the not-always-explained distinctions between various military units. This is a first-rate military science fiction story with a lot of potential, but casual readers should thus been warned. Keeping track of some elements of the story may require a commitment. The payoff, however, is an exciting story reminiscent of Starship Troopers, with a 21st century eye towards widescreen action. John Ringo is an author to keep an eye on.