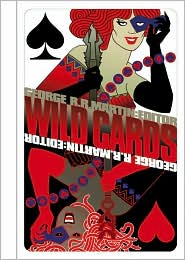 Welcome back to the unpredictable, exciting world of the Wild Cards. After far too long a hiatus, George R.R. Martin has once again assembled a team of top-notch writers to tell some of the stories of a world where nothing is quite like it should be.

A quick primer for those who are new to the series, or who might need their memories jogged: In 1946, an alien virus was detonated over New York City. Thousands died instantly, thousands more were changed forever, and the world with them. Nearly sixty years later, the virus known as the Wild Card has struck every corner of the globe. For every hundred cases where the “card turns,” ninety die horrible, agonizing deaths, their bodies twisted and reshaped in unspeakable ways in what has become known as the Black Queen. Nine of those who survive the initial manifestation become Jokers, permanently disfigured and mutated, the world’s new most visible and least accepted minority. One out of every hundred survive intact, and are granted superhuman powers. These lucky few are the Aces. Of those Aces, only a few are gifted with the spectacular powers of a comic book hero. For many, the powers are trivial, minor, even inconsequential. Some are granted Joker appearances with Ace abilities. For these, they’re simply called Deuces. Got it? Good. There’ll be a quiz.

When the world thinks of Aces, they think of Golden Boy: unaging, invulnerable, superstrong. Or the Great and Powerful Turtle, the world’s most powerful telekinetic, so long as he uses his powers from within his trademark floating shell. Or Cap’n Trips, whose ingestion of certain chemicals transforms him into five other Aces, each inspired by a popular rock song. Or even Croyd Crenson, the Sleeper, who sleeps for weeks at a time, waking each time with a new and unpredictable power and appearance, sometimes an Ace, sometimes a Joker… For every Ace, there’s at least a handful of Deuces, and a greater number still of Jokers. The first fifteen books in the Wild Cards series (reviewed and summarized in Installment #23 of Peregrine’s Prerogative) have primarily dealt with the Aces and Jokers. Now, at long last, the Deuces have their day.

In Michael Cassut’s story, “Storming Space,” we learn the truth about the real first manned mission to the Moon, one achieved by a handful of Deuces and nats (natural humans) in secret. This builds upon his previous story in Book XIII, Card Sharks, which detailed how the first space program, utilizing Aces, collapsed through treachery and catastrophe. The space program in the Wild Cards universe has always been a little ahead of our own, ever since the alien Takisians came to Earth in 1946, and the hideous Swarm invaded in the ’70s. Now, though, we find out how things almost could have been a lot better, thanks to Cash Mitchell, whose power could replace the need for huge booster rockets.

John J. Miller brings us to the early days of a popular supporting character, Digger Downs. In his adulthood, he’s a pesky reporter for the tabloid “Aces” who seems to know just when someone’s got the Wild Card up his sleeve. In “Four Days in October” we see how he first discovered and honed his talent to literally smell Wild Cards. Assigned as a boy to cover the 1969 World Series between the Brooklyn Dodgers and the Baltimore Orioles, he becomes obsessed with discovering what hidden Ace is responsible for the Dodger’s astounding success this season. The answer will surprise everyone, hinging as it does upon a minor but profound change of destiny for a real world political figure. Digger will learn the value of a hidden Ace, explaining a lot about his behavior later on in life. (To say Digger is unpopular with the people he reports on is an understatement.)

Walton Simons explores a pair of Deuces working at a comedy club, in “Walking the Floor Over You.” What good is the power to make someone laugh? What use is the ability to become a protoplasmic puddle? And how will it help against giant ape attacks, or mobsters? In 1977, the Great New York City Blackout hid a lot of secrets… This story guest-stars the ever-popular Croyd Crenson, whose true Wild Card power, I’ve always sworn, is to be present for almost every major event in the series’ history. Also featuring the Great Ape, a Deuce whose power spun horribly out of control, once upon a time.

In Daniel Abraham’s “Father Henry’s Little Miracle,” a priest who can turn water into wine faces off against the deadly Demise, a man who came back from the dead out of sheer spite. At stake is a lot of money, and the life of a common prostitute. It’s just another day in Jokertown, especially for the poor priest, who’s really just filling in. This story takes place during Book Four, Aces Abroad, while the regular Jokertown priest, the beloved Father Squid, is touring the world.

Stephen Leigh picks up the story of a minor character from Book XV, Black Trump, a pilot with an affinity for fire whose involvement with the wrong people turns him into an international exile. The only place he’s safe is on Rathlin Island, which serves as a leper colony for the Jokers of Northern Island. There, a man who can’t go home again will find a home among people who have no home anywhere else. But will he be safe nonetheless? “Promises” is a love story with a tragic twist.

Finally, Kevin Andrew Murphy picks up in the modern day with a tale of Deuces in the spotlight. Swash, a Joker-Deuce with ink in his veins and pens for fingernails, is all in favor of his brother’s band, the Jokertown Boys, making their MTV debut at the newly-reopened Club Chaos. But things go awry when he’s dragged in to help a pretty girl find a very specific top hat. This story focuses on Topper, the Ace who can pull anything at all out of her grandfather’s top hat, and Cameo, who can channel a dead man’s Ace power, if she has the right personal effect. Guest-starring the fabulous Jokertown Boys, it’s a comic romp with surprises and Deuces galore in “With A Flourish And A Flair.”

Deuces Down is a change of pace for the Wild Cards series. The series had been growing progressively darker and bloodier, with main characters suffering, retiring, or dying left and right, and a worldwide conspiracy spelling certain doom and genocide for those touched by the virus. All in all, it was getting downright depressing. However, the stories in this volume seem to collectively aspire to more upbeat tones and endings. Sure, people die, people get hurt, but it’s not the unrelenting bleakness that had descended upon the world before. Maybe Deuces just live better, but in the majority of these stories, hope wins out and romance is at hand, making for a much more satisfying read in general. Perhaps the freedom to focus on these supporting and minor characters has helped inspire the authors to inject more optimism into the series. This is especially relieving, since in many ways this represents a new start for the Wild Cards books.

The bottom line is, Deuces Down is one of the best Wild Cards books in the series, certainly topping (or is that trumping) many of the later volumes in terms of story, quality, and sheer enjoyability. If we see some of these characters again, I won’t complain in the least. Certainly, the characters in Kevin Andrew Murphy’s story are all likable, brimming with potential and whimsy. They could most likely fuel an entire book on their own.

My only quibble with this book, and it’s a minor one, is that you must be able to suspend disbelief, enough to accept that even after fifty years worth of radical social change in the form of superheroes, supervillains, mutants, monsters, aliens and more, Britney Spears still becomes a pop star. Truly, there is no justice.

If you’ve ever enjoyed the Wild Cards series, but perhaps found the later books in the initial run to be a bit bleak, this book is the perfect reintroduction. If you’re a new fan, or have never tried the series before, you can start with this one easily. Though it does feature characters from other books, and pick up after earlier sequences, it stands on its own quite nicely. Inventive, imaginative, and innovative, Deuces Down truly represents the best of what the Wild Cards universe has to offer. Check it out today.