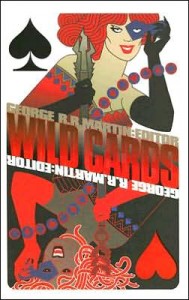 After a significant hiatus, the popular Wild Cards series of shared-world anthologies and novels returns, with an all-new collection of tales drawn from the sixty-year history of a world gone mad. In 1946, an alien virus is released over New York City, killing the vast majority of those it infects, and transforming the rest either into hideously deformed beings (Jokers), or super powered people (Aces). However, a third category has long fallen between the cracks: those whose deformities or powers are so mild as to make them near-inconsequential, people known as Deuces. For the first time, they’re getting the spotlight, as some of the authors best associated with the Wild Cards series reveal the cards up their sleeves.
Michael Cassutt tells the untold story of the first men on the mood, John J. Miller looks at a World Series that never was, Walton Simons looks at the great New York blackout of 1977, Melinda M. Snodgrass approaches the subject of a centaur in Hollywood, Daniel Abraham addresses the matter of faith in a world gone insane, Steven Leigh takes us to Ireland for a look at a modern-day leper colony, and Kevin Andrew Murphy asks what happens what you lose the one thing your powers depend upon.
For those who were already fans of the Wild Cards series, this will be a welcome treat, delivering the same complex stories as before (with a more upbeat tone to them!). For newcomers, this is the perfect jumping-on point, as it’s kept relatively free from past continuity, and explains the premise succinctly enough.