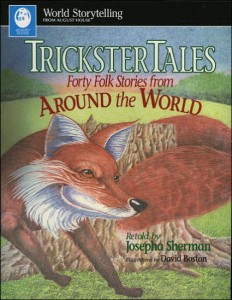 I’ve known Josepha Sherman for over a decade now, ever since my high school days. I was originally attracted to her writing through the fantasy collaborations she did with Mercedes Lackey, and the welcoming, jovial nature of her newsgroup on the late, lamented Genie bulletin board services. Over the years, we’ve run into each other quite a few times at conventions, and as a result, I’ve put together a collection of statements that describe her.

She’s whimsical, with a puckish sense of humor, and a keen sense of the absurd. She’s a shameless huckster, who likes to lurk in waiting in the dealers’ rooms of conventions and bribe people into buying her books with promises of signatures and appreciation. She’s a splendid writer, a wonderful editor, and an accomplished folklorist, with a number of collections under her belt.

Gathered here, then, are a trio of her folklore collections, which demonstrate her range and versatility, as well as her specialties.

The first book is Jewish American Folklore, which was released as part of the American Folklore series, released by August House over a span of some years. For a poor non-Jewish boy like myself, this sort of book is really quite fascinating, giving me at least a little insight into the folklore and humor of the Jews. It starts off with several sections devoted to Lifecycles. The first details “Life and Celebrations,” going into some depth regarding the various holidays and celebrations, explaining the reasoning and methodology of everything from Rosh Hashanah to Passover, and including the Sabbath. Helpfully, there’s an essay on dietary laws, and what exactly keeping kosher entails, something that many people might not be fully aware of.

“Love and Marriage” comes next, exploring both engagement customs and the wedding ceremony itself. That, of course, leads into “Birth and Childhood,” which explains how exactly they go about naming the baby, and what circumcision entails from the religious and traditional standpoint. Then it talks in detail about the Bar/Bat Mitzvah. Finally, we come full circle to “Death and Mourning,” and the Jewish outlook on the afterlife (No Official Standpoint, basically). All in all, this is a very nice primer for those unfamiliar with Jewish customs or traditions beyond the very basic stereotypes.

The second part of the book is devoted to an even more engaging subject: “Folklore,” those wonder tales and moral stories and jokes that so sharply and clearly define a people. Many of them are pointedly obscure, or in-jokes that only someone familiar with Jewish lore and customs would get. They’re wry and subtly self-deprecating in the way a culture is when it pokes fun at itself. They reflect the strength of the people as a whole, and the pride they take in surviving. They possess that knowing irony and sly wink, and they are uniquely Jewish.

The first section is made up of “Wonder Tales,” or the closest things to traditional fairy tales Jews have. Many are familiar, to a point, picked up in centuries of wandering and adapted in turn, such as “A Jewish Cinderella” (which actually combines elements of a number of stories involving poor girls and princes and salt), and “The Snake Son” (which resembles “Beauty and the Beast,” and “The Frog Prince”).

Then we’re treated to a look at tales involving “Ghosts and Dybbuks,” focusing on the supernatural and the restless dead. In here, you’ll find stories of wandering spirits, the golem, those who’ve died without a proper burial. There’s an entire cycle devoted to the gilgul (or gilgl), in which a wandering spirit possesses the bodies of the living in order to fulfill one last task, or wrap up some unfinished business. In here, you’ll often find clever rabbis who save the day with their keen decisions and insights.

After that come tales of “Clever Folk and Survivors,” in which heroes and fools alike outwit the evil and greedy, and survive against the odds. These stories are representative of centuries of wandering and persecution. Here, we see examples of cleverness and cunning, the ability to say the right thing or make the right observation. Next come “Allegories and Moral Tales”, which impart measures of wisdom and try to teach in the process. For instance, there’re tales on living a proper life, the rewards of charity, and the importance of justice for everyone.

Finally comes my favorite section, “Humorous Tales.” All of those sly jokes and clever observations are here, from “It Could Always Be Worse,” to “Logic and Illogic,” from “Rogues and Tricky Fellows” to “Hershele” tales — Hershele being something of a legendary figure, the closest they have to a Jewish Trickster figure. There’re jokes about the Wise Men of Chelm, who are to Jewish folklore what Belgians are to the French, Irish to the English, or the president to Americans. We’re treated to a sampling of “Defiant Humor and Bitter Jests,” in which the Jews poke fun at their own lot in life. (So a Jewish man is drowning in a river, and two Czarist officers refuse to help him because he’s a Jew. With his last breath, he shouts ‘Death to the Czar!’ They promptly rescue him, and arrest him for treason.) The jokelore moves into the New World with jests adapted for American culture and assimilation, touches upon that stereotypical Jewish Mother, and finishes out with a look at the Jewish American Princess.

Following that are a selection of proverbs and riddles, some of which are truly mindboggling.

To round out the book, Josepha has added nearly forty pages of notes, going into details on folklore motifs, sources, references, explanations, and elaborations on some stories. This is true scholarly stuff, and another example of why she’s so good at what she does. After all that is a bibliography listing quite a few books.

This is perhaps an ideal sampler and introduction for anyone wanting to learn more about Jewish culture and folklore through its humor, tales, and customs.

Next up is a book that takes after my own heart. Trickster Tales is a collection of forty folk tales from around the world, focusing on the Trickster in all his/her many shapes and disguises. There’s everyone from Anansi to Tyl Eulenspiegel, Raven to Coyote, and of course Jack. These stories have been drawn from many different sources, representing African cultures, European fairy tales, Polynesian stories, North American Indian tales, and even Appalachian folklore.

What can I say? I love the Trickster. Whether he’s stealing fire, making time with someone else’s wife, dying and being reborn, playing pranks, spinning tales, or running afoul of his own foolishness, he’s a character I can identify with. He’s the Holy Fool, and the capricious hand of fate. He’s a whimsical figure, and an amoral presence who wreaks havoc in his wake.

These stories spin a truly global perspective on the role of the Trickster in mythology and culture. Whether he’s an explanation for why things are, or a scapegoat, he’s universal. Josepha takes each of these multi-cultural tales and retells them with her own unique voice, keeping as much flavor from the original as possible, but still making them enjoyable and easy to understand.

The stories are accompanied by the whimsical illustrations of David Boston. If you enjoy folklore or, more specifically, Trickster Tales, this is definitely for you.

Now we come to Once Upon A Galaxy, in which Josepha plays Joseph Campbell for a new era. Her theory, one she bears out over the course of the book, is that a number of popular stories of today were inspired by stories of yesterday.

Thus, she can compare Star Trek to Jason and the Argonauts, Superman to Moses, Star Wars to Sir Percival, Bugs Bunny to Raven and Coyote and Spider, and The Lord of the Rings to King Arthur, or the quest for the Grail.

Mind you, those are only a few examples. Each section has five or six different stories attached to it, at least. She shows how the archetypes of Star Trek can be traced back to any number of wayfaring odysseys and journeying heroes. She looks at Superman in terms of the noble-yet-unknowing orphan who protects his adopted people, or as the abandoned child who is found and becomes a savior. In Star Wars, we see the archetype of the farm boy who becomes a hero. In Bugs Bunny we see every trickster figure you can name. In Lord of the Rings, we see such familiar elements as the Magic Ring, the Quest, the Unlikely Hero, the Wise Mentor.

As one might expect by now, Josepha accompanies her collection of tales from around the world with a truly comprehensive and in-depth section for notes, references, sources, and further elaboration on how each tale chosen relates to the “parent” story. Completists, folklore enthusiasts and scholars will undoubtedly be pleased with the scope of these notes and bibliography. To be even more helpful, there’s an extensive list of “Suggested Reading and Viewing” for those books or movies which draw upon folklore for their inspiration.

Any folklore collection from Josepha Sherman is well worth the price of admission, and I recommend all three of the above wholeheartedly as high quality and useful in their respective concentrations.