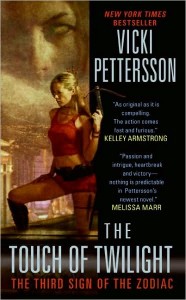 There’s a secret war raging on the streets of Las Vegas, with the hearts and souls of all who live there at stake. Two opposing troops of superhuman individuals known as the Zodiac, one representing Light, the other championing Shadow, meet each other on rooftops and in back alleys, in clubs and in the casinos, locked in an eternal struggle for dominance. However, several things have happened in recent memory to upset this delicate balance. The first was the rise of the Tulpa, a being created out of pure thought, who has taken control of the Shadow Zodiac and uses them ruthlessly to further his own goals. The second was the reveal of a Zodiac agent who’s equal parts Light and Shadow, capable of choosing her destiny. This latter is Joanna Archer, daughter of a former Light Sagittarius and the Tulpa itself. Ever since her true nature and powers were revealed, she has led a strange, violent, disconcerting life, simultaneously fighting against the evil plans of the Shadow, and the distrust of the Light. To make matters worse, Joanna’s supposedly dead, currently hiding under the identity of her murdered sister Olivia. As “Olivia,” she leads a double life as one of Vegas’ socialites and a hidden warrior for the Light, fully aware that one slip could destroy her completely.

Things are getting even more complicated of late; everyone’s convinced that an ancient prophecy means Joanna’s going to go over to the dark side, despite her constant attempts to make them believe otherwise. Her arch-enemy, the Shadow Cancer, is using her knowledge of Joanna’s true identity to target everything Joanna ever cared for — including the former love of her life — for corruption and destruction. Oh yes, and a mysterious third party has been breaching the walls between worlds, wreaking havoc wherever it goes, even as it stalks Joanna in an attempt to claim her very essence for its own. As Halloween approaches, Joanna’s going to have to take some serious risks in order to thwart the plans of her enemies, and she can’t even count upon her own side to back her up. It’s days like this when she wishes she’d stayed dead.

Vicki Pettersson has taken a handful of urban fantasy elements, and tossed in a healthy dose of comic book sensibilities, and topped it off with a keen understanding of human nature and astrology, to create something new and different. You can’t really sit back and call this series urban fantasy, for all that it has got many of the usual trappings, and it’s not your standard-issue superhero series, either. Nor is it romance, even though our heroine pines for the man she can’t have, and struggles with her attraction to the man she doesn’t want. That inability to easily peg it is just one of this series’ many strengths. More importantly, it has got a fast-paced roller-coaster of a plot, that takes the reader through a number of twists, turns, and unpredictable loops, before all is said and done. The action scenes are crisp and easily enough visualized, and play out just like they would in one of your better superhero comics, only with less spandex, and a touch of realism to keep them grounded. Pettersson’s characters are complex individuals, and it’s gratifying that even the bad guys are shown to have their weak spots, vulnerabilities, and sympathies, instead of being complete one-note moustache-twirlers. Just because someone’s unrepentingly evil, and a vicious sadist, doesn’t mean they can’t be interesting, after all. Even our heroine’s not perfect by any means, though it’s nice to watch her continue to grow, change, and accept her true nature and her role in the greater picture. Joanna’s one of those heroines you can root for, even as you watch her stumble and make mistakes and learn from them.

The Touch of Twilight is the third book so far in the Signs of the Zodiac series, and I hope we’ll see a lot more as time goes on. Pettersson’s definitely on to something, tapping into an underused and underappreciated subgenre of fantasy, using comic books and superheroes as her stepping stone into something uniquely exciting, and her books are a must-read for me as a result. I can hardly wait for the next one to come out. It’s my hope that she’ll eventually touch upon how her set-up plays out in other cities; so far all of the action’s been restricted to Las Vegas as part of the series’ concept, but it would be fascinating to see how the Zodiac is represented in other cities across the world. The potential is there. In the meantime, if you want something that mixes wide-eyed superhero action with down and dirty action, all lit by Las Vegas neon, here’s the series for you. The Touch of Twilight builds upon the action and threads begun in The Scent of Shadows and The Taste of Night, and takes it all a bit further in what’s shaping up to be quite the epic tale. Now’s as good a time as any to check it out.