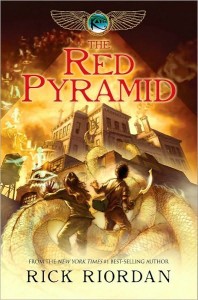 Rick Riordan, author of the popular Percy Jackson and the Olympians series, follows his earlier success with the start of a new series, one focusing on Egyptian myth and lore. A brother and sister discover their link to an ancient lineage of magicians, while seeking to thwart a god’s evil plan.

Though siblings, Carter and Sadie Kane barely know each other, ever since their mother’s death six years ago split them apart. Sadie went to stay with their grandparents in London, where she’s led a normal life ever since. Carter remained with their father, renowned Egyptologist Julius Kane, living out of a suitcase and constantly traveling around the world. One Christmas, they’re reunited by their father, who takes them to the British Museum while acting even stranger than usual. One bizarre magical ceremony and an explosion later, Julius Kane is gone, kidnapped by mysterious forces.

In the aftermath, Carter and Sadie are pulled into a globe-trotting series of death-defying adventures. First, their long-forgotten uncle Amos shows up to take them to New York, where they encounter a white crocodile, a basketball-loving baboon, and a mystery-laden library. And then the bad guys attack, and for the Kane siblings, there’s no turning back as Egyptian mythology comes to life all around them. From gods hiding in human form, to ancient menaces chasing them, from an age-old secret society to their own previously untapped magical abilities, Carter and Sadie are immersed in a conflict that’s been raging for thousands of years. In order to save their father and prevent one of Egypt’s most evil gods from roaming free and wreaking havoc on the world, they need to master their potential and work together. But with dangers on every side, and treachery close at hand, that’s easier said than done.

While set in the same world as Riordan’s bestselling Percy Jackson series, this opener to the Kane Chronicles maintains only the subtlest of links to the Greco-Roman pantheons featured there. Instead, this serves quite satisfactorily as an introduction to a whole new cast of characters and an entirely different set of gods and their stories. As explained in the text, the Egyptian mythos is older and stranger than the Greeks, operating by different rules and structures, where gods can possess people or places and humans oppose them as often as not. Fans of the Percy Jackson books will find a similar, yet unidentical experience here, as the Kane siblings and their allies plunge into the heart of Egyptian lore and beliefs, though occasionally updated for the modern era. From the wisecracking, knife-throwing cat goddess Bast, to the absent-minded barbeque-loving god of information (among other things) Thoth, they run into old myths in new and surprising forms.

While on one level, this is a gleefully indulgent, action-packed race against time, it also addresses the issue of family and loyalty. Carter and Sadie are almost total strangers due to their lengthy separation, and they have to learn to trust one another and rebuild their familial ties in order to succeed. As they work, they uncover secrets tying into their family history, including the tragic truth behind their mother’s death and why they’re tied so strongly to the Egyptian gods. Simultaneously, they move through the convoluted, complex family tree of the gods, where deities can be husband and wife, brother and sister, or mother and child, depending on the depiction and the tale in question. The gods themselves are like any squabbling family, love and hate, pride and disappointment, anger and sorrow going hand-in-hand.

The Red Pyramid is the perfect jumping-on point for a new series from one of today’s most popular YA authors, a rousing adventure steeped in myth and lore and guaranteed to spark interest in exploring the source material which served as inspiration. It’s sure to appeal to those looking for excitement and resourceful teen protagonists.