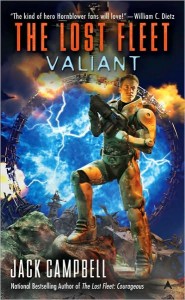 Captain John “Black Jack” Geary never asked to be a hero. He never dreamed of becoming a legend. In fact, by all rights, he should be long dead by now, one of the earliest casualties of the war between the Alliance and the Syndics. Instead, thanks to a fluke of fate, he spent a century in suspended animation, only to be rescued and brought back into service, just in time to assume command of the massive Alliance fleet, lost deep within Syndic territory. Ever since then, he’s fought an ongoing battle to keep his people alive as they make the long, circuitous journey home, in possession of information and technology which could put an end to the never-ending war. It hasn’t been easy, with the Syndic forces harrying him from all sides, and a constant undertone of distrust, conspiracy, and mutiny running through his own forces. But if there’s one thing Black Jack Geary does, it’s to survive.

Now his ragtag, exhausted fleet is forced into battle once again, as Geary makes a snap decision to return to the scene of a recent conflict, there to crush the bulk of his enemy’s forces, and rescue as many captured Alliance personnel as possible. It’s a hell of a gambit, but Geary’s allies have gotten used to his unconventional tactics and record for victory. In fact, some of them are muttering that if he can command a fleet this way, why not command the Alliance itself, when they get home? Of course, getting home is still the hard part. Once again, Geary will make some hard choices, and risk everything in order to keep his people alive and get back to Alliance space. But further complicating matters is the revelation that a non-human species may have been interfering in human affairs all along, and their machinations could spell doom for Alliance and Syndics alike. What’s a legend to do?

Jack Campbell continues to entertain and satisfy with Valiant, the fourth book in The Lost Fleet series. It’s clear that he’s working with a larger picture in mind, since in many ways, Valiant is pretty much just like the books that came before it in terms of plot (Geary tries to get closer to home, while dealing with internal strife and external threats, while space battles ensue). On the other hand, there are some significant developments on a personal level, as Geary deals with the women in his life, and continues to grow into the reputation that grew up around his name while he was in suspended animation. Adding to that are some interesting revelations dealing with the Syndics themselves, as well as the theoretical aliens manipulating things, and it’s easy to see the progression of the plot threads that link the series.

This is a great series, at any rate. Campbell’s achieved an interesting dichotomy here, in which he features, quite literally, a cast of thousands, and yet we only see a tiny handful with any real depth to them, making it a rather small and personal story set against an epic backdrop. Apart from Geary, his lover/sometimes antagonist Victoria Rione, his right hand officer Captain Tanya Desjani, and a few of the other high-ranking officers in the fleet, the vast majority of characters to walk through this book are ciphers, there to follow orders or get blown up. In some ways, the ships of the fleet are more important than the people who crew them. It’s a fascinating way to handle things; I couldn’t tell you offhand what the characters look like, and that’s because Campbell seems to eschew physical description for revelation through words and deeds, and we can form our own impressions based on that. It’s a stylized, broad sketch that captures the essence, if not the details, and it works for this series.

Campbell has a knack for writing broad, fluid space battle scenes, involving dozens or hundreds of ships, without letting things get out of control, and yet he manages to make each wounded or destroyed ship mean something in the process, harkening back to my comment about the ships being characters in their own right. Things get pretty busy, but never overwhelming, making for some enjoyable action sequences. These action sequences play out nicely against the quieter scenes of introspection and moral quandaries and political intrigue which keep Geary busy the rest of the time.

This is one of those series where a new installment leaps to the top of my reading pile, because I know it’s going to be a quick, fun, quality read that’ll give me my military science fiction fix for the time being, and I’ll definitely be looking forward to the next book, whenever it comes out. If you like military SF, The Lost Fleet is always enjoyable, and Valiant is a worthy continuation of Black Jack Geary’s saga.