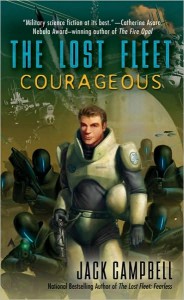 Captain John “Black Jack” Geary is in for the fight of his life. He awoke from a century-long slumber in a survival pod to find himself rescued by a fleet that reveres him for his military record and heroic actions, a fleet that seems to have forgotten everything it once knew about intelligent tactics, smart battle maneuvers, and military strategy. And when the highest-ranking members of the fleet’s command structure were killed, he was forced to assume command by virtue of technical seniority. Trapped deep behind enemy lines in the heart of Syndicate space, possessing a vital piece of information, and in command of the Alliance’s largest space fleet, only “Black Jack” Geary has what it takes to try and get his people home.

It hasn’t been easy in the least. They’ve lost ship after ship, been forced to run from star system to star system, been required to invent new tactics on almost a daily basis, and outguess their enemies over and over. Meanwhile, Geary’s had to contend with internal strife from his fellow captains and commanders, deal with the hero worship, and keep up morale as he teaches the fleet not just how to fight, but to win. And so the Lost Fleet has made its way through Syndic space, leaving behind a trail of destruction and mayhem and shattered Syndic forces, as they overcome the odds repeatedly. But can even Geary sustain a winning record? It’s starting to look grim. The Syndics are starting to catch up to him, starting to understand his tactics. Now he’s got to take the biggest gamble yet. With choices running low and his subordinate captains again challenging his authority, he makes a desperate stab for the Lakota system, which might just offer the way home, if he can make a run for the hypergate stationed there. And that’s when the Syndic flotillas start showing up from every angle. Outgunned, outnumbered, low on fuel and ammunition, Geary’s going to have to make some sacrifices if any of his ships are to survive. And naturally, no plan actually survives first contact with the enemy…

Courageous is the third book in the Lost Fleet series, and it’s almost non-stop action and conflict. When Geary’s not hammering Syndic forces with his unorthodox military tactics, he’s dealing with internal politics from disgruntled subordinates and those who’d rather fight than run. To compound problems, his civilian advisor/lover, Victoria Rione has been acting cold and strange towards him, and his enemies are spreading rumors of an unprofessional relationship with another captain. Geary just can’t seem to catch a break, and that’s before he’s forced to invent desperate new tactics on the fly.

Jack Campbell does an excellent job with the space battles in this book, and I don’t envy him the necessity of keeping dozens of ships spread over multiple fleets and flotillas clear from one another. It’s a hallmark of his talent in this arena that he can coordinate such large battles and make them both exciting and coherent, so that even someone without a military background of their own can follow and enjoy the action. He makes the victories and losses equally powerful, so when a ship dies, it’s like losing a member of the cast. You can feel the tension Geary is under as he deals with the compounding issues and threats and obligations.

There’s very little character description, and very few of the primary cast beyond Geary and his closest confidantes are fleshed out past some identifying traits, and for this series, that’s okay. Campbell’s good at imbuing the characters with enough life to carry them from battle to battle, and let’s face it, this series is about John Geary, a man who as good as came back from the dead to lead his people to safety. I don’t know if that makes him a King Arthuresque figure, or a two-fisted Moses stand-in (and it gets worse once people start muttering about how Geary should overthrow the Alliance government and put an end to a century of war that way…) but Geary plays his role well, trying to live up to a legend and chafing at it nonetheless.

My big complaint is the cliffhanger at the end of this book, and the news that it’ll be another six months before we see the continuation. I like John Geary, and Captain Desjani, and Victoria Rione, and I want to see if they’ll all make it home with the fleet, or if, like Moses, Geary won’t actually enjoy the fruits of his labors. I want to see how they’ll get out of this latest mess, and if their dire predictions are indeed as accurate as they suspect. Do the Syndics really have hidden allies with frightening power, or is a larger game being played?

The Lost Fleet is some of the best military science fiction on the shelves today, and Courageous doesn’t disappoint in the least. I’ll eagerly be awaiting the next installment in the series.