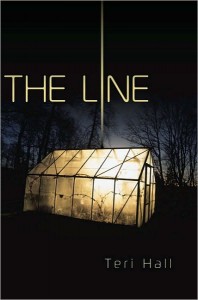 The Unified States are safe, but at a cost. Their expanse surrounded by the invisible National Border Defense System, their society tightly policed by merciless Enforcement Officials, their people rigidly broken down into castes of employment, everything is controlled and oppressed. However, out near the borders, there’s room to breathe and dream. Rachel and her mother have lived on the Property for years, ever since Rachel’s father’s disappearance. Rachel’s been trained by her mother to think for herself, to distrust the government, and to always seek out the truth. As a result, Rachel’s fascinated by the Line, that section of the Border which runs just past the Property, beyond which lies the mysterious expanse simply called Beyond, populated by the Others.

What lies Beyond, for real? If anyone knows, they’re not saying. That is, until Rachel uncovers a message from the Others, sparking a cascade of revelations and family secrets. Now she has to question her life and her purpose, and decide what’s best for her family and herself. But what will her choice cost her?

The Line has an interesting premise, and an intriguing setup. It’s easy to see the parallels between Rachel’s totalitarian, control-obsessed society, and modern day issues regarding immigration, border control, and internal security. It’s also easy to see Rachel’s Unified States as an analogue of the United States, even though this may lead to some inaccurate assumptions regarding the world as a whole. It’s hard to reconcile our world with the one described here, leading to some jarring discrepancies.

Again, there’s a lot of potential in exploring the particular social factors which come together to create this world. Unfortunately, it’s a quick, fast read, and relatively little of the setting is explored in any significant detail. Worse still, the story comes to an abrupt halt, pretty much in mid-scene, setting things up for the inevitable sequel, as though one book had been split in two. As a result, what conflicts have been raised fail to hit a satisfying conclusion, either left unfinished, or else defused early. The rising blend of paranoia and tension could have turned this into a taut thriller, but it somehow feels softened.

A certain lack of depth and characterization counts as a further strike against the book as a whole. For all that we get inside various heads and are privy to their thoughts, I never really felt connected to anyone besides Rachel, and even then it was tenuous at best. Oddly enough, the term I’d use to describe the overall situation is “claustrophobic,” since everything takes place in a very small amount of space.

I enjoyed this book, but it could have been so much more, once it decided what to be. On the bright side, it looks as though the sequel will further explore societies on both sides of the Border, and delve into the mysteries of the Others and their world. We’ll just have to see what happens.