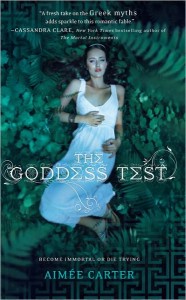 Kate has just moved to the tiny town of Eden, so her dying mother can return home for the last time. Soon, Kate experiences several bizarre events, ending with her making a deal with Henry, the self-proclaimed god of the dead. In return for her mother getting a few more months of life, Kate must stay with Henry, while undergoing a series of tests. Pass, and she’ll rule the underworld by his side. Fail, like all those who tried before her, and perish. Now Kate has to do everything in her power to pass, even though she doesn’t want to spend her life in the realm of the dead. Reality and fantasy blend seamlessly as she’s further drawn into a world where the Greek gods are real, where she’s meant to be the new Persephone, and where appearances are deceiving. It’s an intriguingly romantic, heartfelt twist on an old set of myths, with plenty of potential for future offerings.