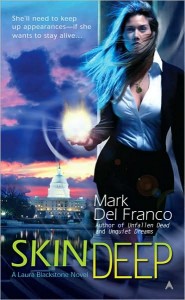 Laura Blackstone is a woman of many faces. Under the Blackstone name, she serves as public relations director for the Fey Guild in Washington, DC. But as Janice Crawford, she’s a freelance druidess who occasionally works with D.C. SWAT when they need to handle unusual targets. And when she slips into the Mariel Tate identity, she’s a globe-trotting, high-level agent for InterSec, the International Global Security Agency. Three very different personas, three very different lives, and so far, she’s been able to keep them separate. Using her innate abilities to create impenetrable disguises, weave magical essence, and sense when someone’s lying to her, Laura is the perfect secret agent. But even she can’t predict how her newest case will affect the delicate status quo which keeps her lives from crossing over and colliding.

A routine drug bust goes spectacularly wrong, resulting in the death of an officer, and “Janice” barely survives, only to find herself targeted for death by an unknown faction. The fallout from this drags the Laura and Mariel identities into a web of conspiracy and intrigue. The National Archives are about to play host to a major exhibition, one with some very important people, both human and fey, in attendance, and there’s every indication that trouble is brewing. But who’s trying to kill Janice? Who can Laura trust? Who will betray Mariel? The revelation that someone has successfully linked all three identities may give Laura her worst enemy yet, or her best ally. But with events progressing, can one woman lead three lives, or will she burn out?

Spinning off from Del Franco’s Connor Grey series, Skin Deep is the start of a new series focusing on a whole new cast of characters, with no discernable overlap as yet. It’s a world where, a century ago, the event known as the Convergence merged portions of the Fey realms with Earth, leading to an uneasy coexistence between humans and fairies, elves, dwarves, druids, and numerous other mythological creatures. It’s a world where shrewd politics, cunning back-room deals and fragile treaties keep the Celtic fairies, Teutonic elves, assorted solitary breeds, and ordinary mortals away from each others’ throats. It’s a world where people like Laura Blackstone are necessary, since there’re plenty of people, human and fey, who’ll stop at nothing to change the world for their own benefit. It’s a nifty setting, one we’ve seen a fair amount of already in the Connor Grey books, and this series promises to flesh it out even more.

Laura has a certain fascinating appeal to her, as we watch her struggle with the pressures, obligations and pitfalls of maintaining so many active identities. As she stumbles at the edge of disintegration due to the events of this storyline, it’s easy to wonder if she’s going to snap once and for all, or if we’ll find out just how strong she is. In the process, we get to find out just who the real Laura is, assuming she even knows herself. Luckily, she has some good friends and uneasy allies to keep her going. So far, I love the supporting cast, from her faithful boggan assistant to her immediate InterSec supervisor, to the cop she’s partnered with as part of the investigation. There’s some excellent chemistry, both platonic and otherwise as appropriate between Laura and her allies, and I really dig the interactions she has with Jono Sinclair, the aforementioned cop who’s packing some secrets of his own.

Del Franco turns in a page-turner of a magical spy thriller here, and while it’s occasionally hard to keep some of the details straight about who knows whom in what identity under what circumstances, it’s overall quite a strong offering. I look forward to seeing what he has planned for Laura Blackstone and her alter egos in the future.