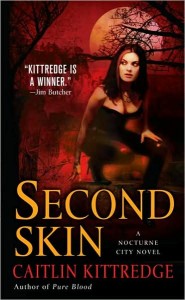 Ever since she transferred into the Nocturne City’s SWAT division, werewolf officer Luna Wilder has been a lot happier. She gets to deal with people before they die, for one thing, and she’s away from some of the coworkers who made her last assignment a pain in the rear. Of course, that all changes when one such pain, David Bryson, a homicide detective who was never her biggest fan, turns up to specifically request her help. It seems he’s got a few dead werewolves on his hands, some very influential people sniffing around impatiently and demanding results, and only Luna has what it takes to put the pieces of this puzzle together. Reluctantly, Luna agrees to help, for the good of the city if not her own peace of mind, and that’s just the beginning. Someone out there was a devious plan, and it all starts with killing representatives of Nocturne City’s oldest werewolf packs . . . which ironically makes Luna, who claims no pack as a matter of choice, a prime target in her own right.

Teaming up with the sexy, unpredictable Lucas Kennuka, who leads a secretive clan of shapeshifters known as the Wendigo, Luna does whatever it takes to get to the heart of things, even as her relationship with fellow werewolf Dmitri continues to fall apart under pressure. Hunted by disgruntled werewolves and renegade Wendigo killers, legally barred from investigating the case due to her personal involvement in the matter, Luna’s pretty much up to her eyeballs in trouble. And that’s before the true scope of the danger is revealed, as well as the true cost of losing.

Kittredge gets better with each book, as she continues to explore Luna Wilder’s world, fleshing out its inhabitants, its rules, and its threats. Second Skin maintains a trend of unpredictability and excitement with the introduction of the Wendigo and the further exploration of the supernatural community that dwells in Nocturne City. I might have thought the first book in the series to be almost routine in nature, but that’s a long-abandoned conclusion. I thoroughly enjoyed the twists and turns here, and the character interactions. It’s always nice to see characters capable of change and growth, and nowhere is this better exemplified than in the grudging partnership built between Luna and Bryson, formerly antagonists, as they work together to solve the case. Unfortunately, poor Dmitri seems to get the short end of the development stick as a consequence, alternating between fits of overprotective possession and self-pity, courtesy of the demon bite that’s infected his very spirit. Lucas, treacherous and conflicted as he is, makes for a great romantic foil by comparison, though he’s just as bad a choice for Luna when one looks at the larger picture.

Second Skin really upped the stakes for Luna and Nocturne City, as well as once again altering the status quo. What started out as a series about a werewolf cop is now revealed to be something larger and more daring, and I’m looking forward to seeing what Kittredge has planned for her heroine next.