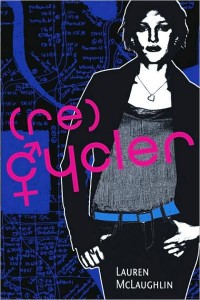 Picking up where Cycler left off, Jill McTeague has decided to make something of a fresh start with her life. Thus, she’s off to New York with her best friend Ramie, while she figures out just what she’s supposed to do with herself – and her male alter ego, Jack. Jack may only exist for a handful of days each month, but he’s ready to seize every moment he can take, and indulge in a freedom he’s never known before. It sounds great, in theory. Jill can spend her time working at temp jobs while waiting to see if her boyfriend Tommy ever completes his road trip across America (and obsessing about how and when to lose her virginity) while Jack discovers what makes him tick, in between bouts of vigorous sex with his girlfriend, Ramie. A compromise everyone can live with, right?

Only New York’s not as glamorous as Jill expected. Ramie’s busy getting involved in the fashion industry. Jack’s showing up earlier and at unpredictable times. People are complicated. Tommy’s barely communicating. And sex is still an issue. All too soon, Jack and Jill are both wrapped up in matters of the heart that are beyond their control,and happy endings aren’t looking so likely anymore. Will they discover their true passions and find the right choices, or will New York be heartbreak for all involved?

McLaughlin has an interesting premise, albeit one buried in layers of soap opera complications and relationship woes. The intertwined struggles of Jack and Jill to find a balance in their lives, both romantic and in general, is a universal one, easy to relate to. Jill’s obsession with losing her virginity in the perfect manner makes an interesting contrast against Jack’s rampant sexuality and desire for more personal time. Ramie, who ordinarily balances them out as best friend and girlfriend, is increasingly removed from the action by outside committments and a new focus, forcing them both to think outside the box and make their own choices.

The problem is, these are storylines which would work just as well if Jack and Jill were indeed two separate people. What makes this book unique is the dual-identitied, gender-swapping nature of Jack/Jill McTeague, and how they coexist in the same body. Is Jill a girl who sometimes becomes a guy? All signs point to “yes” given her majority share. Jack is treated (and rightly feels) like an unwelcome intruder, no matter that he can’t control his own existence or manifestations. Draw your own conclusions, this book is rife with allegorical possibilities. Unfortunately, one thing it lacks is explanations. Why is Jill this way? I don’t recall any explanation ever being given. Maybe it’s gamma rays. Why is Jack showing up earlier than expected, or at inopportune moments? Again, no answers. Maybe it’s hormones, or some deep-down self-protective instinct. It just happens.

In short, it feels like there’s a lot of wasted potential here, in which the endlessly fascinating aspects of a gender-shifting protagonist are sacrificed for a more generic set of emotional/relationship stumbling blocks. This book’s open-ended conclusion leaves things ready for another installment if necessary, while leaving all the characters in different places than when they started. I’d love to see a continuation, in which our heroes further explore their own nature and identities. If nothing else, Jack and Jill would undoubtedly find food for thought, and maybe some understanding faces, in the trans community.

Is this a good book? Yes. Could it be a whole lot better? Most likely. It’s enjoyable, fast-paced, and the narrative voices are easy to relate to. It’s a fun read, but there’s still room to grow.