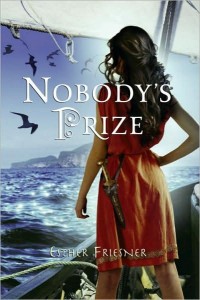 Helen of Sparta is determined to see the world before she settles down at home. To that end, she disguises herself as a boy, and joins her brothers and a host of heroes (and other notable personalities) aboard the famed ship Argo, lead by the notorious Jason. Along the way, both during and after the voyage, she experiences a myriad of adventures, living through the quest for the Golden Fleece as it’s never been told before. It’ll take all of her wits, and a little help from her friends, to make it home alive, intact, and unwed, especially once the all-too-annoying Theseus sets his sights on her. And let’s not even talk about Hercules getting a crush on Helen-as-a-boy! With her trademark humor and keen sense of character, Friesner turns Greek myth inside-out, stripping away most of the magic in order to tell an enjoyable coming-of-age story set against the mythic backdrop of a long-lost age. It’s way too much fun, and the feisty, independent Helen is a heroine worth rooting for.