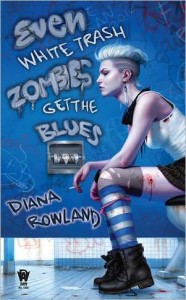 Like the headline says, I have three new reviews up at Tor.com.

The first review looks at the second in Diana Rowland’s new urban fantasy series, Even White Trash Zombies Get the Blues.

The second looks at DC Comics’ latest attempt to reinvent Batman for a new generation, Batman: Earth One, written by Geoff Johns with art by Gary Frank.