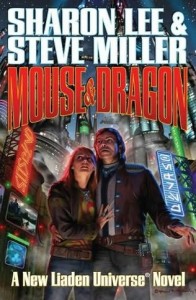 Once upon a time, there was a scared, abused woman with a gift for mathematics, who won a spaceship in a card game, and saw it as her way free from a family who misused and underappreciated her. She eventually met a dashing young pilot, secretly one of the most powerful man on the planet, and they fell in love. Her wicked brother tried to stop her and steal her ship; she survived despite his efforts, and was reunited with her new love, to live happily ever after. Such was recounted in the classic Liaden novel, Scout’s Progress.

Until now, we never knew what happened the next day. Aelliana Caylon has finally started to come out of her shell and live for herself, content in the knowledge that Daav Yos’Phelium, Delm of Clan Korval, cares for her, looking forward to flying her ship and establishing a measure of independence. But things are never as easy as they seem. Her clan refuses to let her go, determined to get their full value from even the most wayward of unwanted members. Propriety and balance must be maintained in the status-conscious, honor-obsessed society of Liad. Customs must be observed and procedures followed, and both Aelliana and Daav have a ways to go before they’re ready to give themselves to each other as fully as they like. And for those who have seen the future of the Liaden series, they know that this is a love story where happily ever after doesn’t necessarily mean forever.

It’s a testament to Sharon Lee and Steve Miller’s superb characterization skills, subtle plotting, and rhythmic use of language that this book can appeal to the heart as opposed to the more visceral senses. It’s easy to get caught up in the ebb and flow of the dialogue, the allure of the setting, and the steady movement of the players, and never miss the lack of more dynamic plot. Aelliana and Daav’s courtship and the stumbling blocks thereof make up the majority of the book, to such a degree that a more action-oriented sequence close to the end actually feels like an intrusion. Like the book this follows, Mouse & Dragon is essentially the bastard child of Regency romance and space opera, and in less capable hands, it wouldn’t be anywhere near as captivating.

I’ve always enjoyed the Liaden series, and of those, Scout’s Progress is my hands-down favorite. Thus, to have this continuation of Aelliana and Daav’s romance was an unexpected treat, one which hasn’t disappointed in the least. A lot of authors have tried to blend romance and science fiction, but very few do it anywhere near as well as Lee and Miller. Mouse & Dragon soars on all levels.