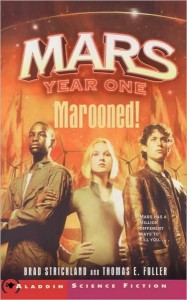 In the year 2085, the first colony on Mars is expanding and thriving, ten years into its creation. But now the true test of survival is coming up: for an entire Mars year, it must exist on its own, self-reliant, self-sufficient, and cut off from Earth’s support. A more recent addition to the colony is the Asimov Project: a group of twenty teenagers specially selected from Earth’s teeming masses to bring a variety of specialties to the mix, as well as to prove children and teenagers can exist on Mars as well as anyone else. Thus, meet Jenny, Alex, and Sean, who form a tight-knit friendship soon after Sean’s arrival. Together, they’ll help each other survive and overcome all sorts of challenges, including some they never expected to deal with. However, the true challenge comes when conditions on Earth decline rapidly, leaving Marsport at the crossroads of a difficult decision, and the teens forced to risk everything for what they believe in.

Marooned! is the first book in the Mars Year One trilogy, and right from the start it sets out an intriguing, if fairly familiar theme. Evoking the same spirit as some of the Heinlein juveniles, it offers rich characterization and an roller coaster plot. Strickland and Fuller get the story rolling quite nicely; let’s hope they keep it up in the remaining books of the trilogy.