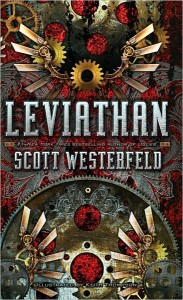 It’s 1914, and the world is about to erupt into war. On one side, the British Darwinists, who use genetically-engineered creatures for everything from manufacturing to warfare. On the other side, the Austro-Hungarians and Germans, who prefer to use Clankers, machinery with a steampunk sensibility. On one side, Deryn Sharp, a 14-year-old girl, has just entered the British Air Service disguised as a boy, where she ends up assigned to the Leviathan, a sky-whale in service as an airship. On the other, Prince Alek Ferdinand, only survivor of the Austrian royal family, is on the run with a few family retainers, one step ahead of those who would kill or use him. When Alek and Deryn’s paths cross, they form an uneasy truce in order to protect the Leviathan as it seeks to complete a vital mission. This isn’t the World War I you read about in school. This is a brilliantly-conceived, exquisitely-executed, “barking mad” alternate history as only Westerfeld could pull off, and it is one hundred percent awesome. A series of gorgeous, evocative drawings by Keith Thompson enhance the overall experience, letting us see the bizarre animals and machines for ourselves. This is one of the strangest, neatest, best books I’ve read all year.