The Feline Supervisory Committee is pleased to introduce you to its newest permanent members.

Maximinius (Max) and Jackeronimous (Jack), aka the Tiny Tabby Terror Twins, aka Fuzzy Pains in the Ass, came to us by way of a long-term foster program in late August. At the time, these wee babies were accompanied by their adoptive mother (Priss), and adoptive big brother (Juan–later big sister Nita after the vet happily told us all about how to determine cat gender by looking at their butts…)

At the time, we were under a strict hiring freeze, for various reasons, and had no intention of acquiring new personnel, even though we were down following the tragic losses of Molly and Diana earlier this year. But right from the start, Max and Jack (who we initially called Tiny, for rather obvious reasons) made a strong bid for permanent residency, utilizing every manner of charm and trick in the book to tug at our hearts. It didn’t help when our Voidpoof, Gremlin, decided these were his babies, and needed his supervision and attention. We never knew he had it in him.

A week after we took them into our care, Jack had a severe medical emergency, and made as it as far as the Rainbow Bridge before he was sent back for another go-around. Following several days of intense love and care, he bounced back to become as fierce and mighty a kitten as possible.

We’d made the decision to send all of the fosters back when their trial period was up. Priss and Nita was happy to go–they knew we weren’t the right place for them. But Max and Jack were just a wee bit underweight, and got sent back to us for two more weeks for fattening up. And well, that’s when they made one last dedicated push for permanency, the jerks. They split up. Jack bonded with Mary, while Max worked his wiles on me. We realized that they had all of the qualities we were looking for personality-wise, and had already made themselves quite at home, and assimilated into the household whether the older cats liked it or not. And when we took them back for their surgery, they were sent back for ANOTHER two weeks because one of them had picked up a little bug and they needed a run of meds. So hey, we took the hint from the universe. These kittens were meant for us, and vice versa.)

So please give a warm welcome to Max and Jack.

And no, half the time we’re not sure which is which either. It’s all in the spots and stripes…

(Pictured:  Max and Jack hunting the red dot of doom with Blaze; Jack hard at work;  Max and Jack celebrating their official status as resident cats; Max telling us what he thinks of the Sebastian the Elder Tabby; Max and Jack annoyed I interrupted them…) 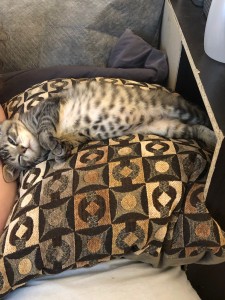 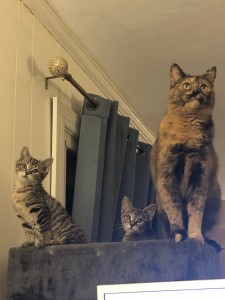 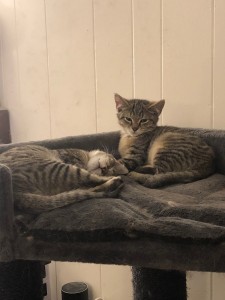 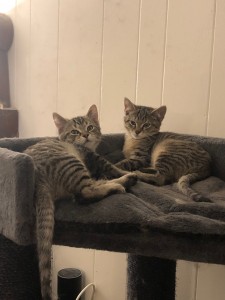