As many of you may know, the ranks of the Feline Supervisory Committee were depleted earlier this year with the untimely retirements of Gabriel and Stucco, two of the original and longest-serving members.  With crucial vacancies to be filled, we set about looking for a cat who could properly take up neglected duties and add to the unstable, female-heavy dynamic.

After interviewing a great many candidates, we finally found what seems to be the perfect cat to fill the empty beds.  Allow me to introduce you to Gideon LeFluff, the Giant Ridiculous Cat. At just around a year old and somewhere in the neighborhood of 11-12 pounds, he shows every indication of indeed growing to become a giant fluffy cat of love. 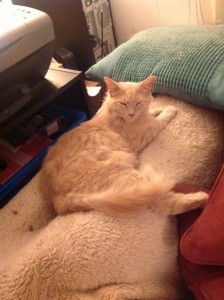 Gideon passed all of the initial tests and probationary period with flying colors. He made himself at home from the second he stepped out of the carrier and into the kitchen. He discovered the joys of catnip toys, learned how to blend in with the tan blanket covering the loveseat, and has, apparently, never ever ever been fed in his life.  Ever. After a period of initial confusion and social upheaval, the others have learned to accept him as a new inevitability.

We are thrilled to welcome Gideon to the Feline Supervisory Committee, and we have every hope that he will serve long and well like his predecessors. 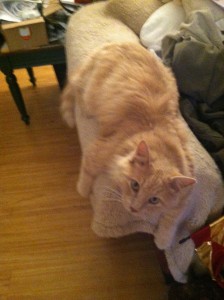 And yes, we call him the Giant Ridiculous Cat, with apologies to Elizabeth Bear and her Dog of the same title, for this cat is indeed something special. He sprawls magnificently, loves cuddles, purrs like a freight train, sleeps on feet, apparently has no bones whatsoever given some of his more absurd poses, and is amazingly relaxed most of the time. He makes us laugh. All thanks to the Franklin County Humane Society for apparently keeping him in their basement just in case we came along, for they found us a good cat.