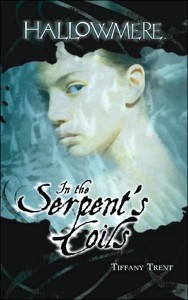 After the deaths of her parents in the wake of the Civil War, Corrine Jameson goes to live with her mysterious uncle. However, after a series of strange dreams and mysterious events, Corrine is sent to Falston Manor, a school for troubled girls. There, oddities abound, and her dreams go ever weirder, and very soon Corrine is embroiled in an ever-deepening set of problems. A conflict is brewing between the Fey and the witches who run Falston, and girls are steadily disappearing. Caught in the middle, will Corrine figure out which side she belongs on, and discover the truth of things before her efforts cause irreparable harm? The first book in a new series, In The Serpent’s Coils is a moody, atmospheric story, full of ghosts and dark imagery, magic and mystery, which will keep readers guessing right up until the last page. I’ll definitely be looking forward to future installments in this series.