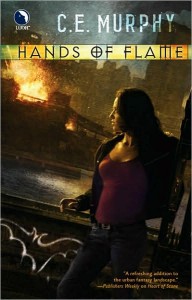 Ever since she was drawn into the world of the Old Races, supernatural creatures dwelling in secret alongside humanity, lawyer Margrit Knight has risked life and limb for them. Time and again, she’s gone up against immensely powerful beings, negotiating and making deals, putting her reputation, career, and very life on the line. Along the way, she’s fallen in love with the noble, tormented gargoyle Alban Korund, giving her heart to him even though their relationship defies sanity and logic. She’s dealt with the dragon crime lord Janx, and the vampire businessman Eliseo Daisani, two bitter rivals locked together in eternal competition. She’s negotiated with the selkies, defied the djinn, haggled with the urban vigilante Grace O’Malley, and placed herself right in the middle of a war brewing between the five races, overturning ancient laws and challenging their oldest customs. And now everything is coming to a head, with plans put in motion and tensions at their highest. The djinn seek vengeance for the death of one of their own, the selkies seek power over the criminal underworld, Janx and Daisani continue their never-ending feud, and the gargoyles gather to decide, once and for all, the fate of Alban Korund, guilty of breaking their most sacred laws. But not for anything is Margrit Knight, called Grit, now known as the Negotiator.

As Margrit fights for the life of her beloved Alban, she also has to keep her mortal friends and loved ones safe. As the last days of her job with Legal Aid dwindle, she both anticipates and dreads her new employment with Daisani. With favors owed and debts to be paid, she’s placed in a number of unenviable positions, forced to work both with and against Janx, Daisani, the selkies, the djinn, the gargoyles, and her ex-boyfriend. Allegiances shift and mysteries abound, secrets are revealed, and promises broken. In the middle as always, Margrit Knight is both catalyst and fulcrum, upon which the fates of five races and their presence in New York rest.

C.E. Murphy wraps up the Negotiator trilogy with Hands of Flame, a roller coaster of a ride that starts off strong and rockets right to the end. There’s a lot going on, with numerous factions all vying for domination, each one with its own agenda and set of alliances, and it’s fascinating to watch the give and take as they make deals and allow concessions, usually with Margrit manipulating or influencing things along the way. It’s a fairly complex, intense storyline, and Murphy does an excellent job of keeping all the balls in the air. Every time you think one thing is wrapped up, something else explodes, making it hard to put the book down, as the five different races and a few unaffiliated extras all collide in new and interesting ways. In the process, quite a few things brought up in the first two books are addressed, explained, and elaborated upon, with a few more mysteries introduced for good measure.

I’d be lax if I didn’t touch upon Margrit. She’s a feisty, gutsy heroine, wholly capable of taking care of herself and more than ready to go up against forces greater than herself if need be. With metaphorical balls of steel, she tackles tricky negotiations between dragons, vampires, djinn, selkies, gargoyles and more without batting an eyelash, never letting them see her sweat. Watching her work is a treat, and an exercise in amazement, especially since she has this habit of surviving every encounter . . . or almost always, anyway. She gets extra points for being a non-Caucasian heroine, without being a token, stereotype, or pointed example.

Janx and Daisani may be one of my favorite pairs of mortal enemies/distinguished competition to cross my desk in years. They’re both immensely dangerous in their respective ways, honorable, cunning, unrelenting, and personable, able to work from behind a veneer of civility. Call them bad guys if you will, but the two of them, either separate or together, have a hell of a dynamic going on, and steal the show whenever they’re onscreen. Murphy adeptly avoids humanizing them too much, and no one’s ever going to mistake Daisani for the watered-down brooding Byronic wannabes that populate so many vampire romances. Murphy’s take on the secretive supernatural races is appealing and fascinating, and I’m actually a little disappointed that this is the last we’ll see of the Old Races for the time being.

There’s a lot to enjoy about this book. The plot is strong and fast-paced, the descriptions are evocative and powerful (especially during the scenes when Margrit is exploring the shared memories of the gargoyles, a major plot point), and the characters are fun to watch in action. Overall, this has been an excellent trilogy, and Hands of Flame is a more than worthy wrap-up to the story, easily one of Murphy’s best works to date. This makes for great urban fantasy. And despite it being part of Harlequin’s Luna imprint, there’s very little romance to be found, save in the form of Margrit’s ongoing love affair with Alban, which sees a few bumps and snags this time around, but nothing insurmountable. In fact, I’d have to say that with their romance pretty much settled in previous books, Murphy felt safe to put it on the back burner while she attacked the greater needs of the overall plot, which is fine by me. There’s enough happening as it is that we don’t need further emotional conflict between the romantic leads. The end result is one hell of a high-octane conclusion to the trilogy, making for a series that’s well worth reading. Tired of cookie-cutter treatments of vampires and werewolves? Here’s a breath of fresh air.