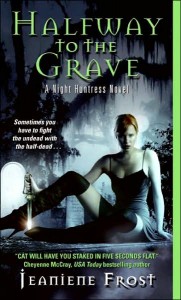 Catherine “Cat” Crawford spends her nights trolling the local bars and nightclubs, luring men to their doom. The almost-unique offspring of a human and a vampire, gifted with certain vampiric traits, she’s promised her mother that she’ll kill as many vampires as possible, all the while hunting for the vampire whose brutal assault led to her birth some twenty years ago. Cat’s good at what she does, skilled at slaying the undead with little more than her cleavage and a stake in her arsenal. But then she runs into more than she can handle. Captured by a mysterious vampire bounty hunter named Bones, Cat is convinced to partner with him, to train under his merciless tutelage and to kill the vampires he sends her after. The idea of working with the enemy is unthinkable, but it’s either that, or her life. And so Cat undergoes an intense period of training, to fully utilize her skills and vampiric powers.

The partnership between Bones and Cat grows stronger the longer they spend together, until Cat finds her opinion of this one particular vampire changing for the better. It’s just a shame her mother would never approve of him. . . . Before long, Bones reveals the true target of his hunting, and Cat joins him in an attempt to bring down a master vampire and his organization of amoral kidnappers and killers. Hundreds of lives are at stake, and only Cat and Bones have what it takes to go against a cabal whose influence reaches higher than they ever imagined. Of course, neither of them can predict how things will turn out, or what other factors will come into play before everything’s resolved.

With plenty of twists and turns, a feisty heroine and an annoyingly sexy male lead, Halfway to the Grave is a spectacular debut for Jeaniene Frost. This book has a lot going for it. Cat is a wonderful blend of blushing inexperience and sultry, sexy temptress, with an attitude that just won’t quit, a believable voice, and a laugh-out-loud way of looking at the most awkward of situations. Bones pulls off an intriguing blend of mystery, confidence, and snarky smugness that owes a lot of inspiration to Spike from Buffy the Vampire Slayer. Together, they make an excellent team, playing well off each others’ quirks and foibles, and the growth of their relationship, both professional and otherwise, is convincing, especially the moment where Cat is forced to reconsider a lifetime of bias and blind hatred for all vampires.

The plot is fast-paced and continually on the move, with Cat getting herself into and out of one scrape after another. Her ability to stumble into trouble is almost too profound to be real; with the number of different ways she falls into harm’s way, one wonders how she survived as long as she did in the first place. I blame her unique nature for turning her into a trouble magnet, personally, and luckily, Frost does manage to explain most of the incidents logically, feeding them into a larger picture of the setting as a whole. There’s a lot going on in the background, and the more the story progresses, the more we pull back to see this grand scheme. As Cat’s perceptions expand, so does the story, proving that a lot more is happening than just one young woman and her passion for staking the undead. The action scenes are sharply-executed, in turns both brutal and cinematic, and the physical chemistry between Bones and Cat is downright sizzling at times.

Frost really upsets the status quo by the end of the book, taking our heroes in some potentially new and interesting directions, and I’ll be eagerly looking forward to the next installment. There may be a lot of vampire-themed paranormal romances already on the shelves, but Halfway to the Grave still manages to stand out from the pack, and I heartily recommend it to those looking for something worth reading. And let me just add that it has a spectacular, sexy cover, one of the best I’ve seen in a while. For those who like urban fantasy with a blend of romance and adventure, this one’s a don’t miss.