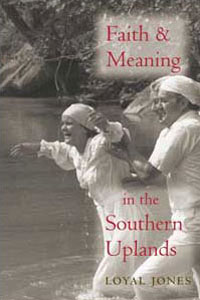 When I first recieved this book, I was looking forward to reading it as I would any book — sit back with a cold drink and a comfy chair and devour the material within. Unfortunately, once I started, I was disappointed — not, mind you, because this is a bad book, but because it’s that good. This isn’t a book to be devoured; it’s a book to be studied. I was disappointed because it isn’t the easy layman’s read I’d expected. It is more complex, and intelligent, and that is perhaps the only disappointment I found in Faith and Meaning.

This is a thoroughly-researched, well-written scholarly look at the religious beliefs and attitudes of the Southern Uplands, a conglomerate of the Appalachian, Ozark and Piedmont regions of the eastern United States. Examining these beliefs and practicies from all sides, Faith and Meaning goes into great detail and is liberally sprinkled with anecdotes and first-hand reports and quotes from the people who actually live there. While the focus is on the Appalachian area, with which Loyal Jones has most been associated, the author does branch out at times to other areas.

This is neither an easy book to read, nor something one delves into casually. Faith and Meaning is intelligent, deep, complex, and sophisticated, treating the subject matter with the utmost respect and fascination. It spares no effort in exploring the multitudinous ways in which Christianity can be found in the Uplands, seeking to put understanding and faces to all of the different forms of Christian rebelief found in those areas. Not only that, but social issues are met head-on, like racial integration, the role of women in religion and social justice. Every aspect of faith is covered here, from faith to God to the devil to what lies in wait for us in the hereafter.

Chapters deal more specifically with the hows and whys and wheres. One focuses on prayer, song, the testimony of the people, and the songs of Zion. Another looks at the role of salvation. An entire chapter is devoted to preaching, and the Word. The first chapter addresses the “human condition.” A section of photographs give us a more personal look at the wide variety of churches (including one with a spectacular rendition of the Ten Commandments on a hillside), and a Kentucky baptism.

Finally, Jones finishes off with a thorough bibliographic essay, a listing of source material for interviews, recordings and notes, and a complete index.

This is a book to be studied, and learned from. Approach Faith and Meaning with a genuine desire to learn about the material within, or with a scholarly intent. It’s not for the casual reader and would leave those with short attention spans lacking, but as a textbook and a reference book, it certainly earns its keep. Just be warned that it’s not for the easily bored. I’m planning to recommend this book to my Sociology of Religion professor, since he’d most likely find it more of use than I would. Loyal Jones does an excellent job with the material, but falls slightly short on making it user-friendly. Check this one out before you commit to buying it.