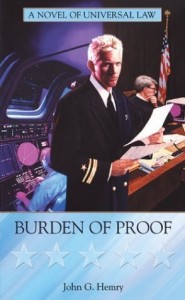 It has been over a year since Paul Sinclair, legal officer for the Space Navy’s USS Michaelson, testified in the court-martial of his first commanding officer. Since then, he’s settled down to a life in space, serving to the best of his abilities and faithfully, if sometimes reluctantly, acting in his legal capacities. With a new promotion to Lieutenant, and an ongoing relationship with fellow officer Jen Shen (currently serving on another ship), everything seems to be going smoothly.

Then, things go horribly wrong. While the Michaelson is in port at Franklin Station, an explosion rips through part of the ship, destroying part of Forward Engineering and killing a good man in the process. The resulting investigation, conducted by Jen Shen’s father, Captain Kay Shen, leaves all of the blame upon the deceased sailor, case closed. But something’s not right. Alerted by something one of his subordinates says, Paul does some digging into the incident, soon discovering that one of the Michaelson’s newest crew members, a popular young officer, may be to blame, and evidence supporting that line of thought has been tampered with. At this officer’s court-martial, all of the secrets and lies will be stripped away, and the truth revealed. But what impact will this trial have upon Paul’s career, or his relationship with Jen?

Burden of Proof is another exciting military legal SF adventure from John Hemry, who has fast made a name for himself as a writer to watch. Perfectly capturing the rapid-fire give and take and dramatic arguments of shows like Law and Order, or JAG (of course), or movies like A Few Good Men, and throwing in the solid characterization of classic Robert A. Heinlein, the story moves at a fast pace; though the build-up takes place over several months, the court-martial itself is almost surprisingly quick. Once I started reading, I was hard-pressed to put the book down, and I’m left eagerly awaiting the next installment of Paul Sinclair’s career. Though I do admit to wondering what sort of trouble he’ll have to deal with next time, and how long he can continue to be the reluctant lawyer, when he’s clearly just right for the job. Burden of Proof, like each of Hemry’s books to date, is a must for any military SF fan.