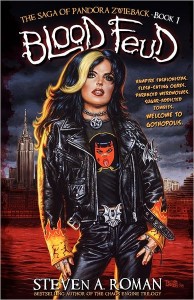 After Goth teen Pandora Zwieback is sent to live with her father in New York City, she discovers that she’s not crazy, she really does see monsters. Teaming up with an immortal monster hunter and a cute guy, she gets dragged into a bizarre war between vampire clans, with a mysterious artifact as the MacGuffin and the fate of the world at stake. The overall concept is solid and entertaining, with Pan providing an appropriately snarky viewpoint. The action scenes are plentiful and cinematic, while the setting is ripe with potential. However, significant portions of the book are narrated by adult characters, making it feel like it’s not entirely Pan’s story. Pacing issues and a whiplash-inducing ending further drag down an otherwise strong beginning.