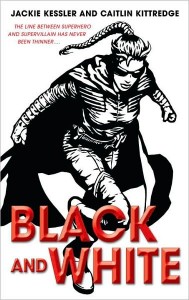 Once they were the best of friends. Now they’re implacable enemies. Joannie “Jet” Greene is a certified hero who uses her powers over shadow and darkness to protect New Chicago. Callie “Iridium” Bradford has used her powers over light to control the underworld of Wreck City, one of New Chicago’s nastiest sectors. They know each other far too well, and for five years, they’ve been at odds. However, all of their previous encounters were just warm-ups compared to what’s about to happen.

Told in alternating chapters, the narrative bouncing between the past and present, the intertwined stories of Jet and Iridium unfold. Their days at the Academy are revealed, exploring how their friendship was forged and broken, detailing the tragic and traumatic moments that turned one woman into a hero, the other into a villain. Meanwhile, in the present, they pursue individual goals which nevertheless overlap and affect one another. Jet’s on the trail of a missing reporter, one who holds the key to a conspiracy that threatens to undermine the very foundation of her daily existence. Iridium has a plan to bring down the support structure which keeps the heroes of the Squadron functioning. But how does the rabidly anti-extrahuman Everyman organization fit into things? As Jet and Iridium work towards their goals, one thing becomes clear: there’s something rotten at the heart of the Academy, and whatever happens will affect every extrahuman alive … and threaten the entire world. Jet and Iridium are about to discover that nothing as as simple as it seems, and it can’t be measured in terms of black and white.

Black and White is a stunning superhero story built on a science fiction framework. Kessler and Kittredge do an excellent job of fleshing out Jet and Iridium’s world, showing us how the existence of superpowered individuals have affected its development over the next century or so, touching upon everything from technology to pop culture. We don’t get to see a lot in regards to normal society, the focus logically falling on how superhumans function, whether it’s their education and training, crime and punishment/rehabilitation, or day-to-day existence. However, enough hints are dropped to suggest that it’s not the happiest of societies, and that an underlying discomfort between human and extrahuman threatens to erupt into something far worse.

Of course, the worldbuilding wouldn’t mean much without the characters to inhabit it, and that’s where Jet and Iridium and all the others come in. From the start, we get to see how these two damaged individuals, each one a product of their society, form a tentative friendship that ultimately devolves into the enmity of the present. They’re believably flawed, both doing things for what they see as the right reasons, even when their actions prove to have unpleasant consequences. The supporting cast is just as fleshed out, from the enigmatic Night to the noble Samson to the quirky Frostbite to the arrogant Hornblower, all of whom have their roles to play throughout the course of the story. The addition of Bruce Hunter as Jet’s sexy assistant, and Taser as a vigilante who teams up with Iridium, injects a certain interesting tension into things; Jet struggles with long-sublimated physical desires, and Iridium wrestles with trust issues.

The plot is fascinatingly layered, with the authors leaping between past and present to drop story seeds and watch them grow. There’s so much happening, and it all ties together, making for a compelling exploration into the secrets at the heart of this society. There’s something corrupt and dark hidden in the depths of the extrahuman world, and watching it all unfold changes the nature of things considerably. Toss in some well-executed action scenes, and you pretty much have an ideal comic book in novel format. It’s going to be a long wait until the next installment of this series.