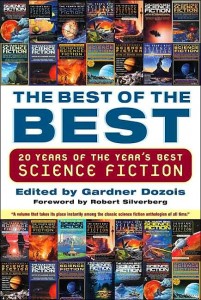 Just a few months ago, I lavished praise upon the most recent volume of Dozois’ Year’s Best Science Fiction. Now we have Best of the Best, an impressive paperback tome which draws upon the first twenty volumes in the series to offer up a fascinating retrospective. As Dozois acknowledges, it’s a purely subjective effort; his choices were influenced by mood, timing, space constraints, and the need to balance out better-known works with lesser-known ones. If compiled a month later or a week earlier, the lineup could have been quite different. And, of course, it’s one man’s opinion. That said, what we have here is still pretty darned incredible: three dozen stories, taken from twenty years worth of the Year’s Best collections, representing the many facets and the vast potential of the science fiction genre.
This volume is chock-full of excellent stories and fan-favorite authors, many of them award winners in one capacity or another. In here, you’ll find Greg Bear, Nancy Kress, Bruce Sterling, Robert Silverberg, Mike Resnick, Joe Haldeman, Connie Willis, Michael Swanwick, Ursula K. LeGuin, Ted Chiang, and many more. To detail the stories themselves, I’d need a lot more space. Suffice it to say that if you’re a fan of science fiction, and you like short stories, it would be a gross oversight not to check this book out for yourself. Normally, I’d say that a title like Best of the Best is like waving a red flag at a bull, but the truth is, Dozois makes a persuasive case with his choices. I’d happily hand this collection to someone who wanted to see what science fiction is capable of, or who wanted a general introduction to the field.