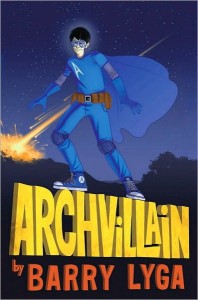 When a plasma storm hits the field behind Bouring Middle School, two things happen. The first: a mysterious kid soon known as Mighty Mike appears, imbued with amazing superpowers and the desire to perform heroic deeds with them, despite his amnesia and unfamiliarity with everyday customs. The second: Kyle Camden, local prankster, is gifted with his own set of abilities: strength, flight, and super-intelligence. Convinced that Mike’s an alien, Kyle tries to expose and discredit the new superhero with the aid of gadgets and trickery, only to meet defeat at every turn. Can the so-called Azure Avenger take down Mighty Mike? And hey, who’s the hero and who’s the villain here? Kyle, the hero of his own story, is becoming a villain in the eyes of the world, and it’s anyone’s guess what’ll happen next. This is the sort of comic book story that can only be told if you’re familiar enough with the tropes to invert and subvert them; luckily, Lyga’s clearly tapped into the right mindset. It’s a clever, twisted, thoughtful tale of ends justifying the means, and good versus evil. I’ll be interested to see where Lyga takes this in future installments, and how the relationship between hero and villain changes for the characters involved.