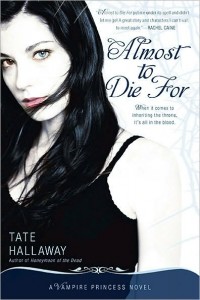 Anastasija Parker always figured she was just a late-blooming True Witch, and she’d come into her powers eventually. Unfortunately, when she turns sixteen and she’s still as boring as ever, she figures that’s it. No powers, no coven, no dice. And then her long-lost father turns up, and drops a bombshell: Ana is half-vampire, half-witch, the product of an ill-advised tryst all those years ago, and it’s time for her to claim her status as vampire princess. Now she’s caught between two worlds, with both parents trying to influence her choice, attracted to two different guys, and oh yes, a renegade faction of vampires determined to kill her. The casually irreverent narrative voice makes it easy to underestimate this story of a teen caught in the ultimate parental dispute, and the main character isn’t the most sympathetic, but it’s an interesting story nonetheless. Part romance, part drama, fleshed out with interesting supporting characters (my favorite: Taylor, the geeky Somali who totally rocks the colorful hijabs), it’s a nice start to a new series.