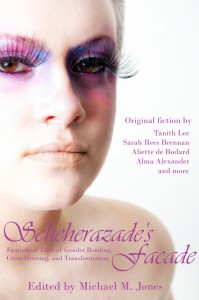 History, literature and mythology are replete with stories of those who, for one reason or another, disguise themselves as the opposite gender, or are transformed into that which they are not. Whether it’s for love, ambition, or self-preservation, whether it’s to challenge the status quo or simply to embrace their true nature, whether it’s done willingly or thrust upon them, there will always be those who cross-dress and blur the lines between genders. Scheherazade’s Facade takes its inspiration from those themes. From Bugs Bunny’s dress-wearing shenanigans, to Mulan’s impersonation of her father, from Tamora Pierce’s Alanna of Trebond, to M*A*S*H’s Klinger, this collection’s antecedents are everywhere.

The premise of this anthology is simple. For centuries, readers have thrilled to the tale of Scheherazade, the vizier’s daughter and renowned storyteller of One Thousand and One Nights, taken as a bride by a king notorious for executing each wife after the marriage’s consummation. To avoid suffering the same fate, Scheherazade spins stories for the king, night after night. But what if there was more to the tale? What if someone was not as they seemed? Through tales of magical transformation, cross-dressing and gender bending, our storytelling heroine postpones her death even as she entertains and enlightens her audience.

For this collection, I looked for a wide variety of things.  First, all stories had to be fantasy. “High, low, dark, historical, romantic, urban, mythical – just about anything goes as long as it has those fantastic elements to it.”  Second, I wanted “stories in which the protagonist or other major characters are disguised or transformed, or otherwise challenge traditional gender roles … heroes and villains, warriors and tricksters, drag queens and cross-dressers, cisgendered, transgendered, and everything in-between.”

Who’s in this anthology?  An excellent question.

Scheherazade’s Facade may be purchased at Amazon, Barnes and Noble, Circlet, and other retailers, in both ebook and print format.

You can check it out on Goodreads here.