It is with great sorry that we announce the retirement of Jennifer Cobweb, aka Jenny Anydots, aka The Grey Lady, after 20 wonderful years of faithful service to the Feline Supervisory Committee.

Jenny came to us as a kitten, around five weeks old, when we rescued her from the shelter, which needed to make room by whatever means necessary at the time. In short, we saved her life, and she spent the next two decades repaying us in love, purrs, and cuddles. In an amusing turn of events, everyone thought she was a male cat at the time, so she started off as Jacob. A trip to the vet later, and she became Jenny Cobweb, and so it was ever since.

We sometimes joked that Jenny was short for “generic” because she was exactly what you’d expect from a Little Grey Cat. But she was never generic. She was a quantum wedgie, capable of shoving that pointed face into any space necessary if it meant getting attention.

Jenny did her best work in the background, a constant presence in the household as her colleagues and peers came and went for many years, but her permanent adoption of the sofa as her domain meant she was always right there to watch over us and make sure we were behaving. Under her watchful eye, no television remote went missing, no butter went unlicked, and no lap remained empty.

In later years, Jenny became the Senior Cat, and joined the Elder Ladies (with Molly and Diana) in both terrorizing and confusing the younger, mostly male, generation. But she never demanded a position of power. Her sole role was to occupy the couch and its immediate vicinity, and keep Mary, whom she considered to be Her Human, company at all times.

But sadly, a combination of age and sickness conspired against her, and Jenny has moved on. She will be missed immensely. The couch is empty without her presence, the room is quieter without her yelling at me (Jenny was, to be honest, an astoundingly shrill cat with no volume control in her old age), and she will be remembered as a true legend. Her contributions can never fully be measured, nor the impact on our lives. This truly is the end of an era.

Pictured: Jenny in her traditional “staring right at you” pose over the years… 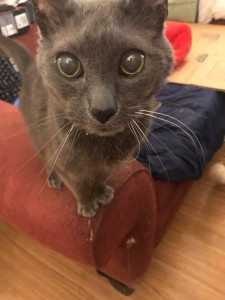 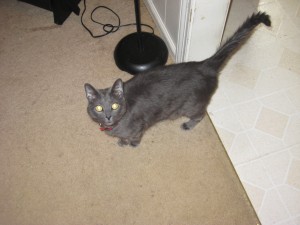 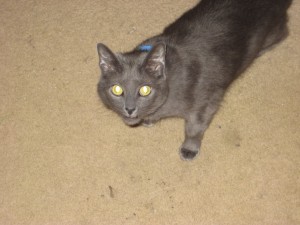 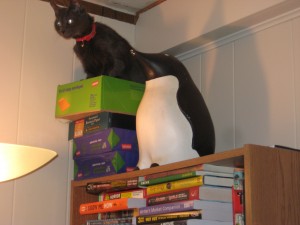 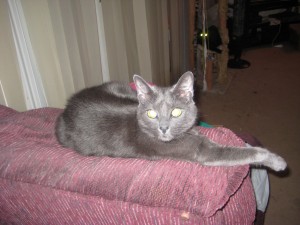