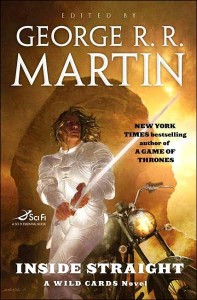 Sixty years ago, the world was transformed by the accidental release of a deadly alien virus over New York City, which forever altered the human potential. For most who contract Xenovirus Takis-A, also known as the wild card, all they can expect is a swift, painful, horrible death. Most of those who survive are horribly deformed, twisted by their subconscious and the virus’ power into hideous Jokers. Maybe one in a hundred comes out ahead, gifted with amazing superpowers, and able to claim the heady title of Ace. For six decades, Aces and Jokers have made their mark on society, for better and worse. They’ve been heroes and villains, gods and devils, prophets and terrorists, victims and saviors. And now, in the new millenium, a new generation of wild cards has come into its own. These are the children of a new era, the ones who have never known anything but a wild card world, the ones to whom the initial outbreak and the chaotic years that followed are dusty bits of history. Not only do they have no idea what the Al Jolson Story is, they barely know who the tragic Jetboy was. For this generation, Aces and Jokers are just another part of society.

And in 2008, a new reality show is about to make its grand debut: American Hero, in which 28 Aces compete to see who’ll be the next great hero and pop culture icon. From all corners of the country they’ve come, full of vim and vigor, fire and energy, ready to split into teams and compete in elimination challenges. They control fire and earth, plants and wind, insects and kinetic energy, can transform themselves or fly, can heal any wound or lift great weights, and they all have one thing in common: a desire to be the next American Hero.

Divided into four teams, one for each suit of cards, these superhuman men and women battle the tasks set by the network, and try to outwit one another. As the game is played, more and more of these would-be heroes and media stars will be eliminated, leaving only the clever, the bold, and the manipulative to fight it out for the title of American Hero.

Meanwhile, halfway across the world, the startling assassination of a major religious figure touches off chaos, and the beginnings of an Egyptian wild card genocide. Before long, some of the American Hero contestants, chafing at the artificiality of the show and driven to make a difference in the world, travel to Egypt in a daring, dangerous attempt to do some good. It’s here, in the face of real evil, with real death looming overhead, that they’ll be tested, weighed, and measured. With the entire world watching, who will become an American Hero, and who will become real heroes?

Inside Straight, like many of the Wild Cards books that came before it, is a mosiac novel: nine authors, each contributing stories, interstitial segments, and background material that all comes together to form one narrative. A strange cross between an anthology and a collaboration, it’s a complex piece of work, made all the more so for its ambitious plotline and sprawling cast of dozens. As such, it’s hard to pick apart the book by story or by author, not when each story builds upon the previous ones, and points of view shift and tone shift frequently. However, I can say this to start: it’s damned good. These authors have turned out a wide variety of new characters to populate the Wild Cards universe, many of them intriguing, all of them unusual. And while I confess to missing the “old school” Wild Cards, such as Popinjay, the Sleeper, Dr. Tachyon, Cap’n Trips, or my personal favorite, the Great and Powerful Turtle, I really hope we’ll see more of this new generation. Jonathan Hive, the journalist who can turn into a swarm of wasps, makes for a great viewpoint character, while The Amazing Bubbles, who converts kinetic energy into fat and then into explosive bubbles, is a sweet breath of fresh air.

Rustbelt, the iron-skinned Ace with a steam-shovel jaw, is wonderfully pragmatic and practical, and we can all recognize that drive to succeed that makes us occasionally do stupid things with Stuntman, who takes a licking and bounces back for more. It’s a shame there’s not more room, to give some of the other characters their time in the sun, since only a handful get fleshed out during the course of the story. For those who survive this story, let’s hope some of the others will take center stage next time.

The plot itself is as sprawling and thoughtful as usual, taking the idea of a world filled with superhumans, and following several thoughts to their logical conclusion. When the series first came out, reality shows were nowhere near as ubiqituous, but in the era of Survivor and American Idol (and Who Wants To Be A Superhero?) it makes perfect sense that in the Wild Cards universe, Aces would get a reality competition of their own. (I can see it now. . . . Who Wants To Marry An Ace? Extreme Makeover: Joker Edition. The Real World: Jokertown.) And of course, as usual, America’s fascination with pop culture blinds it to the all-too-real tragedies and atrocities and conflicts going on elsewhere in the world . . . that is, until a combination of events lure some of the would-be superstars into a situation where they can’t ignore it any longer. Watching as fake heroes become real heroes, fighting and suffering and overcoming their flaws along the way, that’s what makes for a great story.

The nine authors who had a hand in putting this story together all have their individual strengths and weaknesses, but overall, they mesh well together. Daniel Abraham’s interstitual segments, told from the viewpoint of Jonathan Hive (in part through Hive’s blog) help to maintain a sense of continuity and progression as the other stories leap back and forth between characters and events, showing the backstage and onscreen details of the American Hero competition. Carrie Vaughn looks at the story from the view point of Ana “Earth Witch” Cortez, a young woman still learning just what the limits of her powers might be. Michael Cassut introduces us to Jamal “Stuntman” Norwood, whose competitive spirit could win him the game, but cost him a lot of respect. Caroline Spector focuses upon things from the viewpoint of Michelle “The Amazing Bubbles” LaFleur, who struggles with her growing attraction to one of her teammates, while trying to hide a dark secret.

John Jos. Miller actually brings back an established character in the form of John Fortune, son of the famous Peregrine and infamous Fortunato and an Ace in his own right, until his powers burned out after nearly destroying the world. It’s John’s experiences which actually spark the journey from Hollywood to Egypt, as a decades-old plan finally comes to fruition. George R.R. Martin’s protagonist isn’t even part of the competition. Instead, Lohengrin is a German Ace who fancies himself a new form of crusading hero, a knight in gleaming armor. Ian Tregillis follows the story through the eyes of Wally “Rustbelt” Gunderson, who ultimately asks himself just what the right thing is, and what it means to be a hero. It’s his experiences which heavily influence the course of action taken by a number of characters throughout the last third of the book.

Proving that not all protagonists have to be heroes at heart, S. L. Farrell gives us Michael “Drummer Boy” Vogali, a Joker-Ace rock star who’s in it for the publicity and the women. His choices, however ill-considered and poorly played-out, nevertheless take him along a path of possible redemption. Melinda Snodgrass links the overall narrative together with several stories that shed further light upon the mechinations behind the scenes, utilizing several characters including the flamboyant, charming, and all too deadly stage magician, Noel Matthews, who knows far more than he’s letting on.

From the soundstages of Hollywood, to the blood-soaked sands of Egypt, Inside Straight provides a fresh look at the world of the Wild Cards, and I couldn’t be happier. I’ve loved this series since it first started, and this book strikes just the right balance between optimism and pragmatism. Yes, there’s a lot of violence and some characters do die, but on the whole, there’s a somewhat upbeat, hopeful feel to the story. Some of the later Wild Cards books really did seem to lay the doom, gloom, and bloodshed on pretty thick, but Inside Straight gives us some great characters who don’t necessarily get horribly abused for a change. I’d like to think that this book is the perfect jumping on point for a whole new generation of readers, and the perfect welcome back to long-time fans. I was thoroughly satisfied with this entry in the series, and I’ll be waiting eagerly for the next installment. The only thing that could have improved Inside Straight would have been a guest appearance by the Sleeper, but I guess he was taking a nap this time around.

Oh, and for those wanting more of the background, I’m pleased to say, there’s a pair of Web sites dedicated to the Wild Cards saga, and this book in particular, which actually feature character profiles, artwork, and in-character “confessionals” granting some insight into the less-featured contestants on the show. I love getting to see what some of the stranger characters look like. As the Web site updated over the course of several months, following the progression of the show, week by week, it took on a life of its own. Even with the “season” over and the Web site no longer updating, it’s still a fascinating resource and expansion to the book. This site focuses upon the series as a whole, and is quite interesting in its own right. Check them out.