Seventeen-year-old Carmen Bianchi is a violin prodigy, a world-class, Grammy-winning, Stradivarius-wielding musician at the top of her game. She’s on track to compete in, and quite possibly win, the prestigious Guarneri competition, which would catapult her to a new level of fame and fortune. Her life should be perfect.

It’s not. Her mother is a control freak, a former singer now living vicariously through her daughter’s career. Carmen’s stage fright is so bad, she’s now hooked on anti-anxiety meds. She’s seventeen but has never had a “real life.” And she’s obsessed with her competition, the flamboyant, handsome Jeremy King.

As the Guarneri draws closer, Carmen’s life takes an unpredictable turn. She meets Jeremy King face-to-face, and unexpectedly finds a kindred spirit. They should be enemies, but they develop a friendship blossoming into romance over stolen moments of baseball and Chicago pizza. But can two people competing for the same prize also be in a relationship? 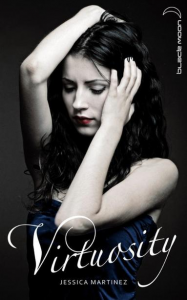 To be honest, Virtuosity is fairly standard romantic fare in how it’s structured. It hits most of the usual beats like it’s playing from a music sheet: girl meets guy, they bond over their similarities, quarrel over the differences, have a huge fight when the tension gets to them both, and ultimately find a resolution. Furthermore, we’ve seen Carmen’s character arc numerous times before. Of course she’s going to yearn for a normal life, and break training to find a measure of happiness, and find out what it’s like to be a teenage girl in love. It’s a common arc for Character Driven To Excel In A Field, and she plays her part to perfection.

When prompted to make a moral choice near the end of the book, Carmen again plays along without missing a beat. It’s the dramatic twist that puts her entire life into perspective and we’d almost be disappointed if she didn’t take that course of action.

So we’ve established that Virtuosity is, regrettably, a fairly predictable coming-of-age romance. However, it’s a beautifully-written one. It starts off with, “Everything before me was perfectly still: a black starless sky over Lake Michigan, my bare arm jutting out between metal bars, and the burnt-orange scroll of my violin rising out of my clenched fist.” The entire book is full of these little bits of evocative imagery, which help to sell this as a story in a lovely evening gown, all gussied up for a more discerning crowd.

Martinez, herself a former student of the violin and classical music, uses that experience to good effect, bringing the performance scenes to life, balancing detail with suggestion. Few readers want to slog through the intricate specifics of performing a violin solo, they just want to understand why it was good, and so she obliges. “Tentative at first, the music began to flow, and then rush, and then soar. I was free, and everything else melted away.”

The romantic chemistry between Carmen and Jeremy is genuine and sweet, exactly what you’d expect from a pair of musical prodigies trying to carve out space for themselves against a backdrop of practices, performances, and high expectations.

So while Virtuosity may be a new iteration of an oft-played song, a YA romance that we’ve seen in dozens of other circumstances, it’s still a well-played one, done by a promising author. You could do a lot worse if you want a feel-good story set in the high-stakes, high-strung world of classical music.